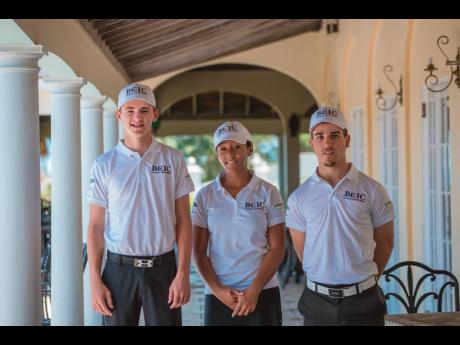 Jamaica’s junior golfers will depart the island next week with aspirations of victory, as they compete in the Caribbean Amateur Junior Golf Championships starting next week Monday July 22 to July 27 at the Albany Resort in Nassau, Bahamas.

The 18 member squad includes defending Under 18 Boys champion Justin Burrowes, Jack Stein and Sebert Walker Jr. along with Hannah Foster, Emily Mayne and Eryn Blakeley, all of whom have just competed in the recent Caribbean Amateur Golf Championships held in the Dominican Republic.

The team was selected following the National Trials, which were held in March at the Caymanas Golf Club.

The team finished second in the tournament last year at the Caymanas Golf Club in St. Catherine. Puerto Rico are the reigning champions and holders of the Hank James Trophy.

Alison Reid, Junior Golf Chair for the Jamaican Golf Association stated in an interview with The Gleaner that the team has been in intensive training since the nationals trials, preparing for the tournament and notes the experience gained by the youngsters, who participated in the tournament in the Dominican Republic as valuable.

“It is very good for junior golf to have six of the eight players playing. So for those children it would be very good for them because it’s competing at the highest level with the grown-ups. So they are competing will all adults or juniors of their peers that are at the same level. So it will be very beneficial for them going into the Junior Championships next week,” said Reid

Although the players will have to adjust to a new course, Reid is optimistic of Jamaica’s chances.

“I think that we have a very good team. I think they have put in a lot of effort. It will be a new course going into the Bahamas. None of the children have played on that course before, but so too most of the other children from the other islands. We are going to have two practise days before we start. If we can use those practise days to get some very useful information, I think we have a good chance of bringing home the trophy,” stated Reid.