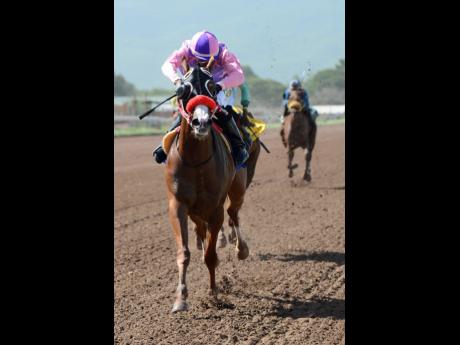 MY SUPER GIRL fought off MY SISTER from the top of the straight, finding extra a half-furlong out, to pull away in yesterday’s overnight allowance at five and a half furlongs, registering back-to-back wins for jockey Oneil Mullings and trainer Philip Feanny.

Breaking sharply from post-position three in the nine-horse field, MY SUPER GIRL first fended off HONEY RYDA before MY SISTER joined the fray coming off the home turn.

Straightening on MY SUPER GIRL’s outside, MY SISTER appeared to have her rival covered but was left standing when the chestnut filly found another gear under a hand ride, quickening on the inner to win by a length and a half at odds of 2-1.

LOTTERY TICKET, predictably outsped in the quick sprint, closed into third place, a length and a quarter behind MY SISTER.

Mamdeen moved to 62 wins by opening the programme aboard 1-5 favourite, BEACH BOY, who made all at five and a half furlongs. He closed his tally with even-money choice, CHIEF OF STATE, in the fifth at five furlongs straight.

Lewis stayed 16 behind Mamdeen with victories aboard MIRABILIS at 9-5 in the third and 5-1 chance SPLENDID VISION in the sixth, sweeping past the battling pair of SOUL CURE and FORMAL FASHION close home.

Though drawn at post-position four, Lewis graciously accepted a clear run on the lighter stands’ side after Aaron Chatrie astride FORMAL FASHION, breaking from stall 10, kept carrying SOUL CURE towards the heavier running in mid-track, before both were gobbled up close home.