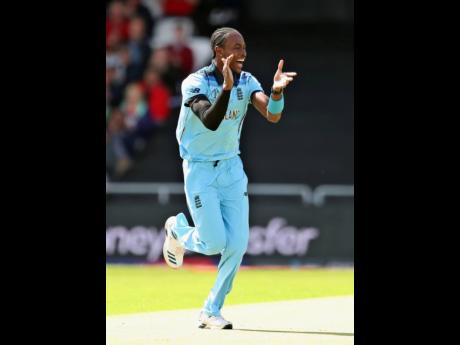 England’s World Cup hero, Barbadian Jofra Archer, has been awarded a central contract by the England and Wales Cricket Board (ECB).

The 24-year-old fast bowler will be on an increment contract for the next 12 months as he attempts to clinch a regular place in the England squad across all formats.

Increment contracts are awarded to players who have impressed in the white-ball format but are yet to assert themselves in any of the formats.

Archer has played a single Twenty20 International and 14 One-Day Internationals, with the bulk of the latter coming during the just-concluded World Cup here.

He snatched an England-record 20 wickets at an average of 23 to lead his side’s attack in the tournament and bowled the dramatic Super Over in a nerve-jangling final against New Zealand at Lord’s last Sunday.

Left out because of injury

However, Archer was on Wednesday left out of the 13-man England Test squad to face Ireland starting in a week’s time because of a left-side strain.

He was not considered for selection along with fellow speedster Mark Wood, who has been ruled out for up to a month and a half with an identical injury.

The ECB said Archer would take a break in his native Barbados before returning here later this month, where he is expected to be a strong contender for the Ashes series.

Archer is yet to play a Test for England.

In fact, he only made his international debut two and a half months ago after the ECB amended its eligibility criteria, reducing the wait period from seven years to three.

Archer was born and raised in Barbados to a British father and represented the West Indies Under-19s in a handful of matches back in 2013.

After being snubbed by selectors for the 2014 Under-19 World Cup in the United Arab Emirates, Archer turned his attention to representing England.

He currently has a county contract with Sussex.