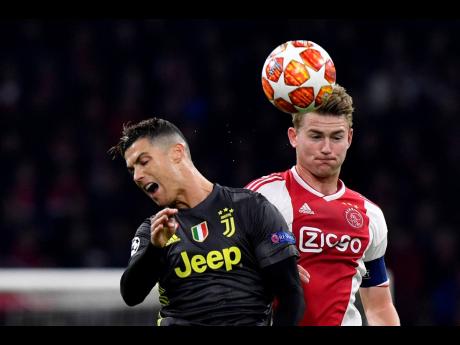 AP
In this Wednesday, April 10, 2019 file photo, Ajax’s Matthijs de Ligt (right) fights for the ball with Juventus’ Cristiano Ronaldo during the Champions League quarter-final first-leg match between the two teams at the Johan Cruyff Arena in Amsterdam, the Netherlands. Defender Matthijs De Ligt has signed with Juventus.

Matthijs de Ligt became the most expensive defender in Serie A history after completing a €75-million transfer from Ajax yesterday.

Juventus announced the deal’s completion, saying they had signed the Netherlands international to a five-year contract.

The 19-year-old De Ligt was captain of the Ajax squad that reached the Champions League semi-finals last season, having scored the winning goal against Juventus in the quarter-finals.

The highly regarded centre back is set to join a veteran defence featuring Juventus stalwarts Giorgio Chiellini and Leonardo Bonucci.

Juventus said in a statement that the deal was “reached for a consideration of €75 million, payable in five financial years, and additional costs of €10.5 million”.

While contract details were not revealed, De Ligt’s contract is reportedly worth €8 million per season and could reach €12 million with bonuses.

De Ligt’s signing follows those of midfielders Aaron Ramsey and Adrien Rabiot by Juventus, with goalkeeper Gianluigi Buffon also back after one season away at Paris Saint-Germain.

And as Cristiano Ronaldo enters his second season at Juventus, the Turin club is putting together a serious bid to win the elusive Champions League.

Since Juventus’ last title in 1996, they have finished as runners-up five times in the top European competition.

Strong both on the ground and in the air, De Ligt scored twice with headers in the Champions League last season – with only Ronaldo (four) managing more.

Juventus are overwhelming favourites to win a record-extending ninth straight Serie A title.