JCA: U-19 prep boosted by Sandals 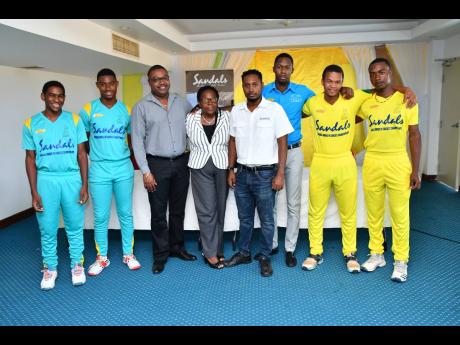 As the Jamaica Cricket Association (JCA) prepares its under-19 outfit for the Cricket West Indies (CWI) regional under-19 tournament in St Vincent and the Grenadines, it is celebrating the input of Sandals Resorts International (SRI) – the three-year sponsor of the JCA’s U-19 championships and academy.

This tournament is used to select the national team for regional competitions, and the academy fine-tunes the preparation with off-field personal development sessions.

“We have taken time to address our dip in form in regional competition for this age group. A calculated and concerted effort has gone into preparing these young men to be regionally competitive as well as sharp enough to contend for places in the national senior set-up. This approach would not have been possible without Sandals responding to us in a moment of need three years ago,” said JCA CEO Courtney Francis.

The Sandals U-19 Championships ended last week with the Southern Sparks defeating the Eastern Flames in the final at the Trelawny Multipurpose Stadium. In a game reduced to 44 overs, the Sparks were put into bat first and made 235 for 5. Ricardo McIntosh top-scored with 76 runs, earning him Man-of-the-Match honours; he was ably supported by Romario Moxam with 61 not out.

In response, the Flames were extinguished for 99 with 10 overs to spare. Four Sparks bowlers picked up two wickets apiece, with the best of the lot being Andre Morgan (2 for 12 from 6 overs) and Odane Thompson (2 for 6 from 2 overs).

Francis noted, “The preparation also includes a personal development component. The players are now benefiting from sessions with sports psychologist Olivia Rose; it doesn’t end there, because they are also trained in media management, social media etiquette and interpersonal skills, among other things. We are developing complete cricketers.”

Meanwhile, Crissano Dalley, PR manager – sponsoprships at Sandals, added, “We are involved at the regional senior level and the best way to secure the future competitiveness and longevity of the Windies is to get involved at the youth level in various territories. It creates moments of tremendous pride for the brand and our people when we can look at a Windies team and see talent that we have watched mature from age-group cricketers into senior cricketers.”

The JCA will announce the national under-19 team and management at a press conference at Sabina Park on Tuesday, July 23, at 2:30 p.m.