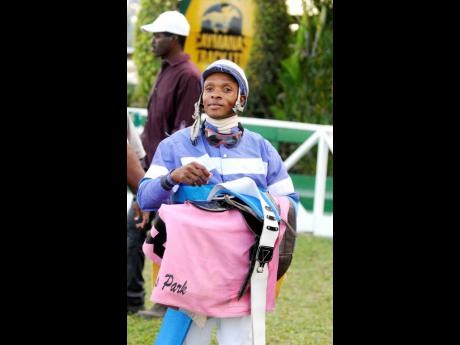 The 33-year-old scored in race two over six furlongs with 2-1 choice Eaglebine and returned to capture race six with 9-1 bet Mister Henry Lee, in a seven-furlong contest.

Mairs has 25 wins for the season, three clear of Barbadian Antonio Whitehall in third, with Alex Cruz topping the standings on 32 wins.

Mairs opened his account when he paired with four-year-old gelding Eaglebine to trounce the three-year-olds and upward by 43/4 lengths in a gate-to-wire effort.

They were two lengths clear at the half-mile run in 45.40 seconds and were never under any serious pressure in the run in.

In contrast, he brought the five-year-old roan gelding Mister Henry Lee from off the pace to beat the three-year-olds and upward by 2-3/4 lengths to land his second winner of the day.

He raced off the pace set by Fifer with Barbadian Renaldo Cumberbatch aboard, with Hotnthirsty and Californium duelling for second.

Mairs made his move passing the eighth pole, overhauled the leader and drew off handsomely.

The Assiniboia Downs seasons runs from May 12 until September 8.