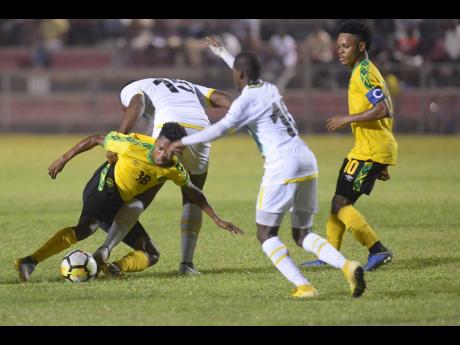 Shorn Hector
Jamaica’s Nicque Daley (left) goes to ground after being tackled by Dominica’s Peltier Kassim during their CONCACAF Under-23 Qualifier at the Anthony Spaulding Sports Complex in Kingston on Wednesday. Jamaican Alex Marshall (right) looks on. The game ended 1-1.

Donovan Duckie, head coach of Jamaica’s national Under-23 football team, feels that his team’s result against Dominica on Wednesday was a match of lost opportunities as the teams played out a 1-1 draw at the Anthony Spaulding Sports Complex.

“It was a good overall performance from the team. We created about 12 to 13 chances on the stat sheet but only converted one. It’s difficult when the finishing is not there to show for the performance,” Duckie explained. “There are a lot of positives that we can take from the game as well as things we can adjust and look to fix.”

Jamaica dominated the possession and created multiple chances throughout the match but found it hard to convert. They went down in the 37th minute when Dominican defender Tobi Jno Hope found the back of the net from close range.

Substitute Nicque Daley made good on his promise to score goals when he was able to find the equaliser for the Jamaicans in the 58th minute after latching on to a cross from captain Alex Marshall, a display coach Duckie commended.

“I think he did exceptionally well for a youngster that left the DaCosta Cup and left for overseas, making an impact in the USL,” he said. “He did pretty well for the team; he did what was asked of him. That was his duty, to score, and he did. We expect more good things from him.”

The team’s focus right now will be their next fixture against St Kitts and Nevis which will conclude the group matches.

Duckie says he is expecting a much better display from his team in the attacking area as that match will prove to be important if they are to advance to the next round of the competition.

A way to do this, the coach explained, will be observing the match between Dominica and St Kitts which will be played today at 4:30 p.m. at the same venue, to learn more about their opposition.

“In terms of improving the finishing, that is an area that we will constantly try to improve on a day-to-day basis,” Duckie stated. “In terms of playing our next game, we have a chance now to see our opponents. We will be looking for any tendencies and trends and will try to capitalise on their weaknesses and nullify their strengths.”

The match between Jamaica and St Kitts and Nevis is slated to start at 6:30 p.m. at the Anthony Spaulding Sports Complex on Sunday.