Glenmuir off to flyer in Ali Cup 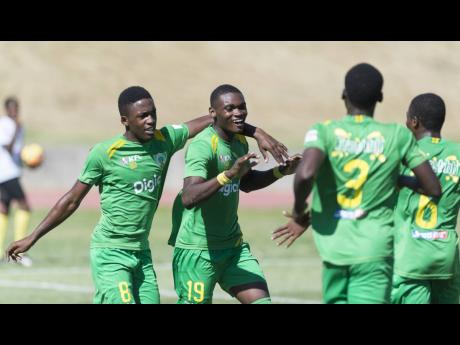 Glenmuir High School ended day one of the Excelsior High School pre-season football tournament, the Ali Cup, as the only team perfect from all matches played, winning all of their three games yesterday.

The Glen Laing-coached team defeated Hydel 1-0 in their first match then stopped hosts and defending champions Excelsior 3-2 on penalties after playing to a goalless draw. Then in their final game against Vauxhall, they trashed last season’s beaten finalists 4-0 to sit atop Group A with a maximum nine points. The Clarendon team will now play another unbeaten team, Dinthill in their fourth and final game today.

Laing, was pleased with his team’s display on day one, and although they are aiming to win the tournament, he maintains that his focus is getting the players up to his required standard before the beginning of the ISSA schoolboy football season.

“I am feeling very good,” he said. “We are here to try and play football and also win. Winning is a habit, and I am trying to develop that in the Glenmuir youngsters and so far, so good.”

“We are happy we are here as there are a variety of teams with different styles, so we are learning as we go along, and we are winning and scoring goals. We are about 60 per cent (ready) now, and we are trying to get stronger, and with one month to go, we will try to develop that momentum so at the start of the competition we can be about 90 per cent.”

“The Ali Cup has really benefited us with the playing different styles,” Laing shared. “There are a lot of good coaches, so you really have to plan and organise so you can come forward. That’s what my team has done, and I like it,” he added.

HOPE FOR THE BEST

Excelsior may be in trouble to qualify for the last four, with Glenmuir leading the group, followed by Dinthill with six points after two wins from two matches. But Excelsior coach Everald Campbell says they will go for the win and hope for the best.

“We have to win the game (today) and pray the other results fall in our favour. These games are practice, but remember, we are just two weeks into training. But the sky’s the limit to move forward,” he said.

Glenmuir lead Group A with nine points, followed by Dinthill Technical and Excelsior with six each, while Hydel and Vauxhall have no points. Over in Group B, three teams (Camperdown, Manchester, and Holy Trinity) are tied on six points. Clarendon College have a win and a loss (three points) from two games while Charlie Smith are without points after three straight defeats.

Ali Cup organising committee member Carlton ‘Sambo’ Hammond is proud that the event continues to grow and include more schools.

“Ali Cup is bigger than all of us, and that’s why we want to include everybody. We want everybody to be a part of it, and that is why next year, it will be three days as we plan to extend it,” he said.