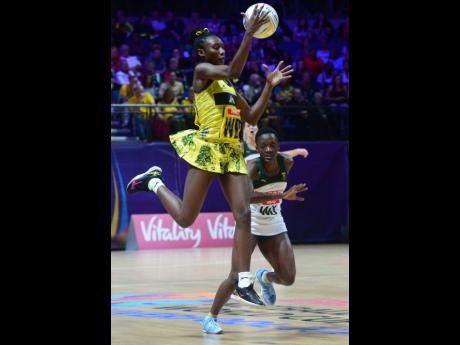 Jamaica defender Jodiann Ward has been revelling in the experience of competing here in her first Vitality Netball World Cup.

The 24-year-old has managed to force her way into the Sunshine Girls starting line-up after a number of outstanding performances off the bench.

The soft-spoken player, who hails from the parish of St Ann, told The Gleaner after the Sunshine Girls’ 77-47 victory over Zimbabwe yesterday that she has gained invaluable experience from the trip.

“It is great! The crowd is amazing, and they bring the vibes, and we are bringing the vibes as well,” she said.

“I am enjoying every moment because this has been a great experience for me, and I will only get stronger and stronger from this,” she said.

Reflecting on the Sunshine Girls’ performance against Zimbabwe yesterday, Ward added: “I think I performed well because I went out there and gave it my all, so I am happy for this.

“I think the team also played well because we know that we had to hold each other up because we are down at the moment, so it is just to lean on each other at this moment.”

Jamaica, who are ranked second in the world, have failed to secure a spot in the semi-final of the championships for the first time since 1995.

“We are trying to get over not being in the semi-finals,” she said. “It took some time, so we have to regroup and finish the championship strong,” said Ward.