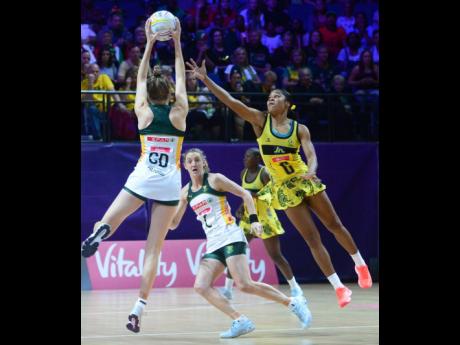 Former president of Netball Jamaica (NJ) Marva Bernard believes that the present administration should consider employing a sports psychologist to assist the Sunshine Girls whenever they compete in international tournaments.

The Sunshine Girls, who are ranked second in the world, had a poor showing at the Netball World Cup (NWC), failing to secure a spot in the semi-finals for the first time since 1995.

Bernard, who led NJ from 2005-2015, told The Sunday Gleaner that the NWC is getting a lot tougher over the years while pointing to the significant improvements made by all the competing teams, particularly those ranked outside of the top four.

“I believe that the Netball Jamaica administration will do whatever is necessary to find out what went wrong,” said Bernard. “I think going forward, they may want to look at the mix of staff because I think that a sports psychologist on the team could assist because this is a high-pressure competition.”

Bernard also outlined that Jamaica’s domestic league is not on par compared to other top leagues around the world, and so most of the island’s players are at a major disadvantage whenever they compete on the international stage.

Bernard, who presided over the Sunshine Girls’ last medal at the NWC in 2007 when the team captured the bronze in Auckland, New Zealand, stated that like most Jamaicans, she was very disappointed with Jamaica’s performance at the championships.

“The girls have not realised their dreams, and it is difficult for everybody and it is a difficult moment for all of the players and the management team and the organisation,” she said.

Bernard, who is currently the president of the Americas Federation of Netball Associations noted that the she would be using all her expertise to develop and improve the sport in the region.

“My focus is on the Americas region, and I will always have Jamaica in my heart. We congratulate the countries in our region, and we have this strong desire for more of us to be here and to continue to do better at the next NWC in South Africa,” said Bernard.