Fraser-Pryce on top in London 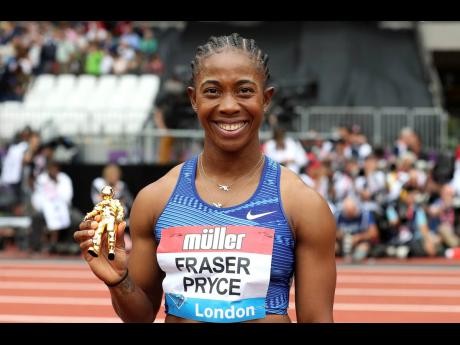 Martin Rickett
Jamaica’s Shelly-Ann Fraser-Pryce is all smiles after taking gold in the Women’s 100m final during day two of the IAAF London Diamond League meet at the London Stadium in London, England, yesterday.

Shelly-Ann Fraser-Pryce, who began her exploits at the London leg of the IAAF Diamond League on Saturday with a storming anchor leg to help Jamaica win the 4x100m in 42.29 seconds, kept up her rich vein of form for another fantastic run yesterday.

She cruised through her 100m heat in 10.95 seconds, and after a false start that eliminated two-time 200m world champion Dafne Schippers, Fraser-Pryce wowed her rivals in 10.78 seconds, well ahead of Britain’s European champion Dina Asher-Smith.

“At first, I was a bit put off by the false start, but I was glad I was able to go back and reset myself,” the three-time 100m world champion said.

Victor over Fraser-Pryce in both the 100 and 200m at the recent National Championships, Elaine Thompson won comfortably over Ivorian Marie-Josée Ta Lou in 22.13 seconds in the 200m. World and Olympic bronze medal winner Shericka Jackson edged training partner Stephenie Ann McPherson in the women’s 400m, 50.69 seconds to 50.74, and a day later, Akeem Bloomfield made it a Jamaican double over one lap. Just fifth at the Nationals in the 200m, he scored a fine seasonal best time of 44.40 seconds to outrun a Barbadian national record of 44.63 seconds by Jonathon Jones. Nathon Allen, also from Jamaica, was third in 44.85 seconds.

Running in her second Diamond League meet, Rushell Clayton outduelled 2013 and 2015 World Champion Zuzana Hejnová of the Czech Republic in the 400m hurdles and smashed her personal best, down from 54.73 to 54.16 seconds in the process.

“I never came here expecting to win. I just came here to execute my race,” she said. “As long as you execute your race on the day, you will get to where you want to be.”

Yohan Blake and Omar McLeod placed third in notable races. Blake was timed in 9.97 seconds flat in the 100m final, which was won by Commonwealth Games winner Akani Simbine of South Africa in 9.93, ahead of Britain’s Zharnel Hughes, 9.95. McLeod, the World and Olympic champion, trailed China’s Xie Wenjun and Wilhem Belocian of France in the 110m hurdles. The Jamaican star hit the first and last hurdles but still managed 13.32 seconds, with Xie and Belocian both clocking 13.28 seconds.