Oral Tracey | Victims of their own success 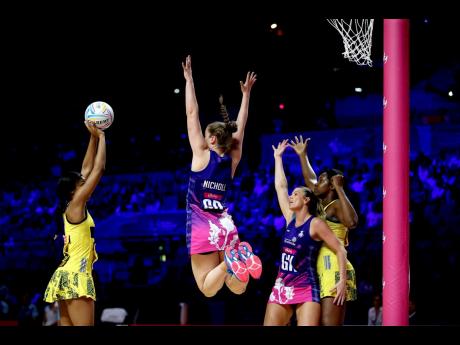 The early and disappointing exit of Jamaica’s Reggae Girlz at the first round of the FIFA Women’s World Cup, followed by the limping elimination of the Reggae Boyz, albeit at the semi-final stage of the Concacaf Gold Cup, a few weeks apart, left Jamaican sports fans yearning for a feel-good release.

The Vitality Netball World Cup in Liverpool, England, provided the timely and perfect refuge for this much-sought-after solace for the near-sobbing fans. After all, the Sunshine Girls have come to our rescue many times before and are still the nation’s best and most consistent performing international team.

The positive predictions were rolling in as the girls went into England with their eyes and minds affixed to and on the mission of finally lifting this elusive trophy. After all, there is genuine quality and experience in the key areas of the team. The release of the world rankings, which had Jamaica climbing to number two, fuelled the optimism even more. Vivid memories of recent victories over perennial world powerhouses New Zealand and England also helped to fan the flames of expectancy.

Then reality set in. When they lost their group game to South Africa, it was scary, but the underlying confidence remained, with the feeling that they would make amends against England and continue their quest for glory. It never happened against England, as the girls themselves, the coaching and management staff, and especially the Jamaican fans, all came crashing down to Earth.

It was difficult to take and hard to reconcile, the girls having their worst returns at this level in over 25 years despite the positively changing dynamics of more Jamaican players plying their trade in the top leagues of the world.

Another reason is the addition to the long-awaited involvement of now assistant coach Winston ‘Scrappy’ Nevers, the man who is widely regarded as the best netball coach in the country. It was unthinkable that the girls would be involved in a play-off for fifth place in the world.

Stories are coming out of England about rifts in the camp, with players not passing to other players on the court because of personal grievances. Players have come out and forthrightly blamed the coaching staff for poor tactical decisions while at least one member of the coaching staff has punched back, saying that player indiscipline was a major issue.

The disappointment is both real and reasonable. All things considered, Jamaica should have done better in this tournament, and by the Girls’ very own high standards, this tournament was a forgettable flop. Getting lost in all the emotions of the moment though, is how good the Sunshine Girls have been for so long, to the point where it is now routinely taken for granted that Jamaica will always be on the medal podium.

No longer is there an appreciation that the countries we are directly competing with for supremacy in the sport – the likes of Australia, New Zealand, England, and South Africa, in terms of sheer numbers and resources – are in a different stratosphere from Jamaica, and we really have no divine right to be where we have been for so long.

The netball leadership in Jamaica, along with several generations of players has, over the years, managed to chart our own meticulous course around these adversities, and against all the odds, to keep us at this elite level. This is almost to the point where no excuses will be accepted for below-par performances, but as we all lick our collective wounds and prepare to come again, the consolation in the chaos is that the Sunshine Girls, this time around, are mere victims of their own success.