Pacquiao back to best against Thurman 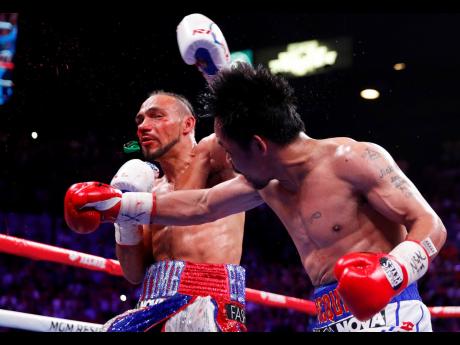 John Locher
Manny Pacquiao (right), with a devastating right hook, punches the guard from Keith Thurman’s mouth during the fifth round of their World Boxing Association Welterweight title fight at the MGM Grand Garden in Las Vegas, Nevada, on Saturday. AP

From his first-round knockdown punches to his tenacious 12th-round finish, Manny Pacquiao gave yet another one-sided thrashing to Father Time.

Keith Thurman was a whole lot tougher to beat, but the 40-year-old Filipino senator managed to win that vote as well.

Pacquiao (62-7-2) dropped his previously unbeaten opponent with a combination late in the first round, and the Pac-Man ­dominated the opening rounds with a combination of flair and power that recalled the incredible prime of the only eight-division champion in boxing history.

Thurman (29-1) showed remarkable tenacity in rallying through the middle rounds, repeatedly testing Pacquiao’s chin with big shots. Neither fighter managed another knockdown, but they pushed relentlessly in front of a sell-out crowd at the MGM Grand Garden that repeatedly chanted Pacquiao’s name from the moment he reached the ring.

“It was fun,” Pacquiao said. “My opponent is a good fighter and boxer. He was strong. ... I think he did his best, and I did my best. I think we made the fans happy tonight because it was a good fight.”

“I knew it was close,” Thurman said. “He had the momentum because he got the knockdown in Round 1. ... I wish I had a little bit more output to go toe to toe. My conditioning, my output was just behind Manny Pacquiao’s tonight. Tonight was a blessing and a lesson.”

Pacquiao appeared to be declining as recently as two years ago, when he lost a listless decision to Jeff Horn. But while his political career flourished, Pacquiao also revived his ring career with solid back-to-back victories over Lucas Matthysse and Adrien Broner.

Thurman represented another major step up in competition, but Pacquiao’s strong start quieted any speculation that he would suddenly look old in a matchup with an elite welterweight champion.

Thurman’s effort was impressive on paper: He landed slightly more punches than the famously active Pacquiao, and his 192 power punches landed were the most by any Pacquiao opponent in his 43 fights that were tracked by CompuBox. But Pacquiao had a dominant jab, and he outworked Thurman in the 12th round, throwing 56 punches to win the round on two judges’ cards.