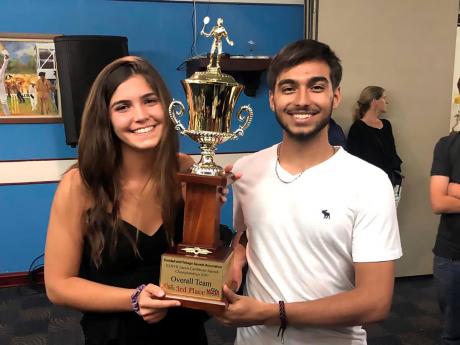 The Jamaican girls’ squash team took a silver medal in the team competition at the Caribbean Area Squash Association’s (CASA) Junior Championships, which buoyed Team Jamaica to a third-place finish overall, behind three-peat winners, Barbados and runners-up Guyana, as the tournament wrapped up over the weekend in Trinidad and Tobago.

After beating Cayman 4-1 in the first round of the team competition, the girls went on to surprise Guyana, the number-two seed with another 4-1 win. A subsequent 5-0 victory over St. Vincent and the Grenadines sent the Jamaicans to the semi-finals where they beat Bermuda 5-0.

In the final, for the first time since 2013, Jamaica were up against regional kingpins Barbados, who fielded the strongest girls’ team in the competition. Mia Lake played first for Jamaica, but she lost 11-2, 11-8, 11-7 to Jada Smith Padmore. Next up was newly crowned under-13 silver medallist, Mehar Trehan, who fought bravely but was eventually defeated 9-11, 11-8, 11-6, 11-5 by Eboni Atherley, the reigning regional under-13 Champion.

In the boys’ competition, the Jamaicans played off for fifth place after losing 4-1 to Cayman and 4-1 to Barbados in the early rounds. In their final match-up, the boys waged an epic battle against Trinidad and Tobago, which kept spectators on the edge of their seats.

President of the Jamaica Squash Association, Chris Hind said, “Our juniors had a tremendous showing, rallying back from a sixth-place finish last year to take third place overall this time around and we couldn’t be more proud of them.

“The youngsters proved that they can handle themselves in the regional arena and they deserve our heartiest commendations; just as our sponsors, Burger King and all the rest of our supporters deserve our deepest gratitude,” Hind added.