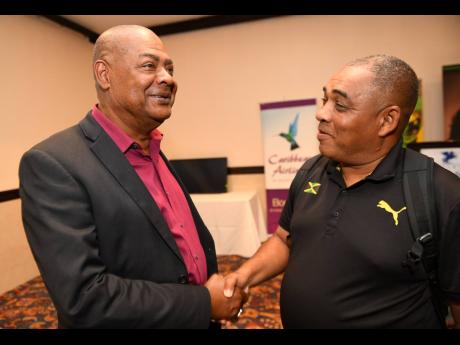 Ricardo Makyn
From left: Jamaica Football Federation President Michael Ricketts greets Reggae Girlz head coach Hue Menzies ahead of a press conference held at the Jamaica Pegasus yesterday, where the members of the country’s women’s football team for the Pan Am Games were introduced.

After leading Jamaica to their historic participation in the FIFA Women’s World Cup in France recently, Reggae Girlz head coach Hue Menzies said that his next goal is to help the country establish a vibrant, sustainable women’s domestic league.

This he hopes to accomplish in an effort to ensure that quality local players continue to come through the local women’s programme.

Speaking to The Gleaner at a press conference yesterday at The Jamaica Pegasus, where members of Jamaica’s Pan Am Games female football squad and their sponsors were introduced, Menzies noted that his best national players have their roots in Jamaica and that he wants to ensure that top local talent continues to come through and get opportunities to progress and develop.

“The key is to really establish a good women’s league here, which is still very important for us. We do feel that the majority of players, the better players that we have, are rooted from here (Jamaica), and we want to continue that. So we want to make sure there is something in place to keep watering that root. So that’s a very high topic for me – to get the league going and get the league established and be sustainable,” Menzies said.

He said that once a viable league has been established, it will be easier to help young players make the transition to the senior team, and this, he believes, will assist the country to reach even more Women’s World Cup tournaments.

“[With a league established] we can then inject ourselves in younger players and the grassroot, the 15s and 17s , because it’s not about the last World Cup; it’s about the next one and the next one after,” he reasoned.

Menzies said that he was talking to respective stakeholders to get an idea of what would be required to establish a strong women’s football league locally.

The local women’s league was abandoned for two seasons due to struggles for sponsorship after Sherwin Williams pulled the plug in 2015 after 14 years of sponsorship.

In the last two years, the Jamaica Football Federation and Lascelles Employees and Partnership Credit Union combined to sponsor the league and knockout for approximately $12 million. But even so, the competition has failed to attract the interest and excitement it once generated, but Menzies is confident that a strong local league would boost the development of local players and continue the success of the national teams at international tournaments.

“We have a long-term plan, so we have some successful players that we plan to have here that can go both ways (junior and senior). So we will have those players, and we will be looking forward to building them and the entire programme, and the local women’s league is important in all of that,” Menzies said.