Captain Campbell eager to lead Girlz at Pan Am 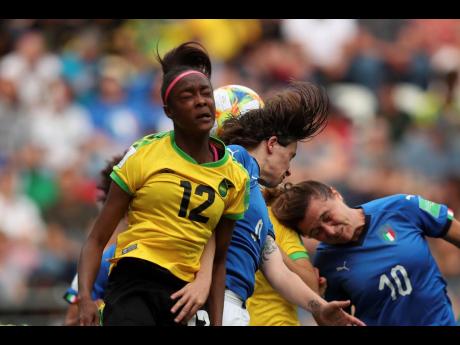 Sashana ‘babyface’ Campbell, who was appointed Reggae Girlz co-captain along with young ­goalkeeper Sydney Schneider for the Pan Am Games squad, said her experience and that of other ­seasoned campaigners, such as Toriana Patterson, will be extremely important, given the young group of players that will be travelling to Lima, Peru, for the games.

The 28-year-old Campbell and 25-year-old Patterson are the only players over the age of 22 in the current Pan Am squad, and the ­former junior Reggae Girl says their know-how will be crucial to achieving their ambitions.

“Since I got here, I heard about this (captaincy). But I know that being the oldest of the group, and probably having the most experience of all the players in this team, that I was going to be asked to step up somehow, whether by wearing the band or helping the team go forward as a leader somehow,” Campbell reasoned.

Campbell, who came through the youth ranks of the national team, has never worn the armband, for her country, but she is looking forward to leading from the front and helping to guide the young ones in the team.

“I am going there to work really hard and to do my best to help the team get some success,” she ­continued. “I strongly believe in the group. It’s a younger group with not much experience, but it’s a good set of girls, and we are going out there to do our best, and we hope that some of the more experienced players can gel with the younger ones and we can move forward.

“But we have to put our experience forward and help to push the younger Girlz, and not just for the Pan Am Games, but we have to see what we have going into the future for other tournaments,” she continued.

Nevertheless, the former Christiana High School player, who now plays professionally for Maccabi Kishronot Hadera in Israel, said she is excited about the new role and is hoping to prove useful to the team.

“First of all, I am excited to be here, although when wearing the national colours, I am always excited for that. But I am also excited to try and use my experience to help bring some success to this team at the Pan Am Games. It will be a bit tough but it’s nothing I can’t handle,” she said.