Family and community the driving force behind Gayle CC 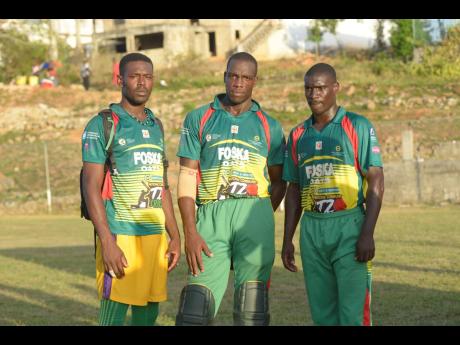 Gayle Cricket Club out of St Mary is one step closer to making it to the final four of the SDC/ Wray and Nephew National Community T20 Competition, as they advanced to the play-offs of the tournament as one of the best losers following, quarter-final action on Sunday.

The team, that was crowned parish champions in 2018, will be banking on the three cousins, Sheldon Pryce, Jermaine Chisholm and Anthony Walters to get them over the hurdle when they face Fairfield of Manchester on Sunday in Manchester.

The winner of that encounter will go straight into the semi-finals, and that is something that is firmly on the mind of captain Sheldon Pryce.

“Our team is a quality team and we have been playing together as a unit for many years. We all attended the same high school, Tacky High, and we know each other’s game very well. it is going to take an all-round team effort to get us to the semis, but I believe once we have passed that stage, we are going to go all the way,” Pryce said.

The Gayle cricket team is eager to go as far in the competition as possible, as one of the team’s mandate is to donate 15 per cent of the prize money to a community-based initiative. The further a team gets in the competition, the higher the prize money, and opening fast bowler Jermaine Chisolm feels it would be a big uplift for the many communities in and around St Mary.

“We have helped to fix up and build a lot of the schools around the area over the years. When we won the parish championships a couple of years ago, we were able to fix the roofs and paint schools such as Goshen Primary, Mile Gully Basic School, and this year Barclay Town Basic School will get some of the funds,” Chisholm noted.

The parish has been fully behind the Gayle team, which finished third in the national competition some years ago. Wicket-keeper batsman Anthony Walters, who leads the team in runs scored with three centuries, is keen to hand St. Mary their first national title.

“The people of St Mary love their cricket, and we want to bring home a national title. We have a lot of talent in this parish, and we want to show Jamaica that good cricket is played down this side,” Walters shared.