Jackson gearing up for World Champs 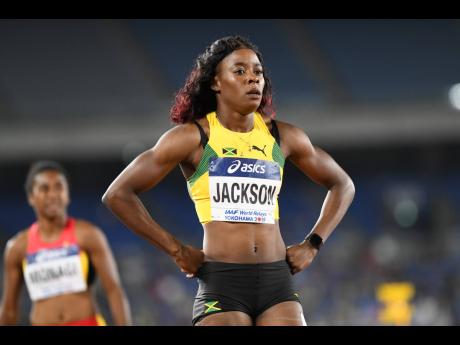 Jackson fought off MVP Track Club training partner Stephenie-Ann McPherson to win the 400 metres as her preparations for the World Championships continue. The Jamaican champion relished the battle with her compatriot.

Explaining her state of mind as she battled her teammate and Briton Laviai Nielsen in the closing metres, the 2015 World Championship and 2016 Olympic bronze medallist evinced, “You always have to be confident and fight until the finish.”

Though her time in London is away from the lifetime best of 49.78 seconds she established en route to the national title last month, it served a dual purpose.

“I used this as a training run ahead of the World Championships, so to get the win and add some more Diamond points, I am very happy with that,” she said to reporters in London.

Once a reluctant convert to one-lap running, she now seems to love the event.

“The 400m is a great event to be a part of, as it is very competitive, and I am enjoying the competition,” she revealed.

The men’s 400m went to Akeem Bloomfield, who moved to the event due to injury, while in high school.

Bloomfield produced the fastest time by a Jamaican this year with a run clocked in 44.40 seconds on a track where he had success last year.

“I got a pretty good time so I’m happy right now,” Bloomfield said.

A mere 5th in the 200 metres at the National Senior Championships, Bloomfield couldn’t be happier.

“As the season progresses, I just want to get better and better and I’m really excited right now.”

Prior to the London race, the fastest time by a Jamaica was 44.84 seconds by Demish Gaye at the Nationals. Gaye was fifth in London with a time of 45.11. Rounding out the top three were Jonathon Jones, who set a Barbadian record of 44.63 in the runner-up position, and 2017 World Championship finalist Nathon Allen of Jamaica in 44.85 seconds.