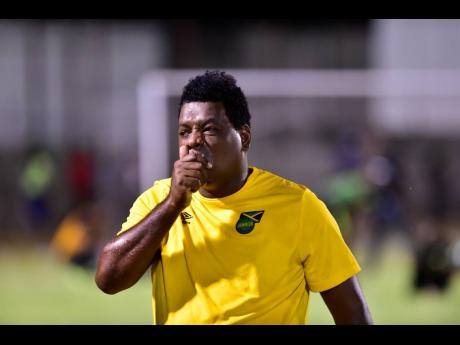 Under-fire coach Donovan Duckie will lead Jamaica’s national Under-23 team into the Pan Am Games football championship, which begins tomorrow, despite the team’s disappointing showing at the just-concluded Olympic qualifiers held here in Jamaica at the Anthony Spaulding Sports Complex.

The team, which left yesterday for Lima, Peru, where the games will be held, will continue to be coached by Duckie as confirmed by Jamaica Football Federation (JFF) president Michael Ricketts, who explained that their technical committee did not have time to meet and assess the team’s performance in the Olympic qualifiers. He noted that the squad was already booked to travel to Peru and arrangements were already in place.

However, when the team returns from Peru, the technical committee will meet and do a full evaluation of the Olympic qualifiers performance and try to get answers as to why they performed as badly as they did.

“‘Disappointed’ is an understatement because I really think that we have real quality players, and for us to have drawn with Dominica and drawn with St Kitts and Nevis was extremely disappointing,” Ricketts said.

“We have actually started [analysis], but the coach (Duckie) and the squad leave [yesterday]. He will travel with the team to Peru,” he said.

“But as soon as they are back, the technical staff will meet with us, and we will have a fulsome discussion. A report will be tendered, and then we can have an idea of what exactly was the thought process of the technical staff and what really went wrong. We could not have made any adjustments (to the staff) at this time because all the tickets were booked for the Pan Am Games, all the technical staff were in place,” Ricketts continued.

Knocked out in first round

The young Reggae Boyz were knocked out in the first round of the Caribbean Olympic qualifiers after they failed to get a win in two matches at home against Dominica and St Kitts and Nevis. St Kitts won the group with four points after a win and a draw, while Jamaica ended second with two points and Dominica on one.

Duckie has received a lot of flack for the failure of the team, which many consider to be one of the most talented group of players assembled at that age level for Jamaica.

Additionally, with the support of the Jamaica Olympic Association, which came on board and gave a financial boost to the programme in an effort to help the country qualify for football at the Oympics for the first time, many were expecting heads to roll immediately after the Olympic qualifying disappointment, but Ricketts insists that there can be no decision until the team returns from Peru.

“We will have an introspection when they return from the Pan Am Games, and then we will take the necessary action,” he stated.