Laurie Foster | Williams doing her talking on the track 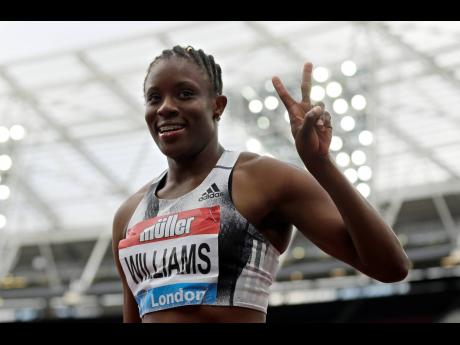 It must have pleased Jamaican track and field supporters the way in which 2015 100m hurdles world champion Danielle Williams has responded to the negative energy surrounding her performance at the National Senior and Junior Championships.

Her disqualification following a false start, which effectively ruled her out of the World Championships, was, to put it mildly, unfortunate. Subsequent confusion in a rerun of the race was inconclusive. Despite that exercise being declared null and void and all that obtains from such a ruling, she would not be considered when the selection committee met behind closed doors to name the three who would contest the event on the big stage starting in September.

At that point, it appeared that her only chance of making the flight to Doha would lie in her winning the Diamond League title which, according to IAAF rules, would guarantee her a wild card from the world governing body.

However, the president of the Jamaica Athletics Administrative Association (JAAA), Dr Warren Blake, halted that thought process with a statement which advised that there was no guarantee of that eventuality. He added that his executive had to meet and decide if it would accept the offer from the world body. One is not sure if a further statement accredited to Blake formed a part of what he said originally, but suffice it to say, this was not reported in the first instance.

Coming several days later, it gave as a reason for not accepting the wild card a matter of affordability on the part of the JAAA. Is Dr Blake really serious? Is the public being asked to understand and accept that a wild card offered to a qualified Williams might be refused because the JAAA was not able to afford the cost of sending her? On relating this new twist to a colleague steeped in the all-embracing knowledge of track and field, came the response, “No man, tell me he did not say that.”

This past weekend, Williams, competing at the London Diamond League, demonstrated her intention to fight for her cause with an outstanding national record in her event. She clocked 12.32 seconds, a world-leading time, and remained in the race for qualification to the final, the winner of which will be awarded that wild card.

Anyone watching closely live or on television and not considering the time to be convincing enough would have been impressed by what took place at trackside after the event. The former Queen’s School athlete rushed to the waiting arms of her coach Lennox Graham, formerly of Kingston College, and now in charge of the hurdles programme at Clemson University in South Carolina. With her agent, the controversial Cubie Seegobin, and Norman Peart standing by in admiration, the ensuing embrace told the entire story of satisfaction in the way she spoke her piece in the face of what has appeared to be a case of discrimination.

Viewing that scene, and the energy and excitement in its execution, it became clear what Williams’ camp meant when it refused to comment on the National Champs incident, her coach simply stating, “ trying to get my athlete ready for her upcoming assignments. That is the sole focus.” There was little interest, if any, for further discussion, as there was more important work to do and he should be commended for that decision.

With 10 weeks to go for Doha, it is hoped that good sense will prevail in the minds of the JAAA executives charged with the responsibility of naming the team. No one should want politics to feature in a situation so crucial to the lives of the athletes who endure the challenges and sacrifices of preparation to represent their country.

All things considered, and with the strident position taken against Williams, the JAAA should be asking itself a very pivotal question. What would have been its decision had Usain Bolt found himself in a similar situation?