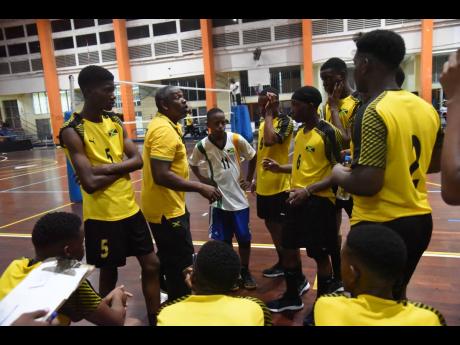 Kavarly Arnold
Steve Davis (second left), coach of the Jamaica Under-19 male team, talks to his team between sets during their match against Suriname on Monday in the CASOVA Youth Volleyball Tournament at the G.C. Foster College of Physical Education and Sports.

Coaches Steve Davis for the boys and female coach Shedieky Hamilton-Barnes expressed concerns over the lack of preparation heading into the six-day tournament after both teams lost their opening games on Monday.

Since then, the boys, who are the defending champions from 2015, have bounced back with a 3-1 sets win over the US Virgin Islands.

“The team at that time (2015) was a bit more experienced than the team that we have now. What hindered the progress in terms of preparation is that the boys were from all over the country, and training would take place during school time. Many of them wouldn’t get to come into Spanish Town at G.C. Foster College. So we only had weekends when we could get the boys together. It wasn’t until schools went on holidays that we got them into a proper camp,” Cowan said.

“In terms of the age group, although it’s an under-19 and under-18 tournament, the players have to be three years younger. It was very difficult to find players. Even though we had trials, the girls that came out, in terms of technical ability, were not at the point where we could build on what they have for competition. Although we have an active primary school league, the level is not yet where we want it to be,” she added.

Despite the lack of experience, Cowan believes that the boys still stand a good chance of defending their title and that the girls’ youth programme can continue to develop from this opportunity.

“The expectations were not overly high for the girls for obvious reasons, but at the end of the day, we came in with the intention to compete, so if we can get into the semi-finals, that will be great as this tournament was really to see where we are and to develop our youth programme because we really haven’t done that on the girls’ side. So, hopefully, we can keep the girls together and have them transition into the other age groups in the future,” she added.