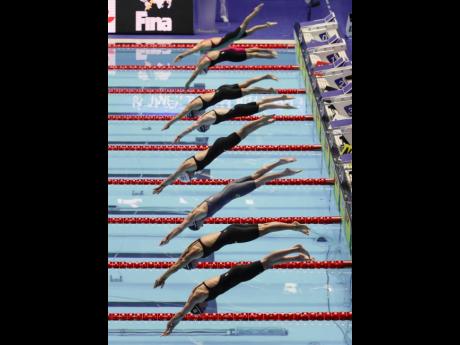 There was no improvement for Jamaica’s swimmers as the second day of the swimming section of the FINA World Championships continued from the Nambu International Aquatics Centre in Gwangju, South Korea.

Keanan Dols, who made his senior debut on Tuesday night (Jamaica time), placed fourth in Heat Four of the 200m Individual Medley (IM) preliminaries, with a time of 2:05.18 seconds, but was not fast enough to advance in the event. The top 16 qualifiers had times of 1:59.76 seconds or better. Dols will seek to have a reversal of fortune in his pet event, the 100m Butterfly, which gets under way tomorrow.

The final will feature defending champion Chase Kalisz of the United States, who qualified after winning his semi-final with a time of 1:57.34 seconds. He will be challenged by China’s Sun Yang, who will be seeking another world title to add to his résumé, having retained his 200m Freestyle title. Yang became the third man to have won multiple world titles at the event and to have won at three consecutive major championships.

However, the medal ceremony wasn’t without controversy as British swimmer Duncan Scott, who won bronze in the event, refused to share the podium or be photographed with Yang, protesting his involvement due to Yang’s doping history. Yang responded to Scott, calling him a “loser”. “You’re a loser. I’m a winner!” stated Yang.

Yang was banned for three months by the Chinese Swimming Association in May of 2014 after testing positive for the then-stimulant trimetazidine and is currently involved in a controversial incident with drug testers, which involved Yang’s bodyguards allegedly destroying vials of blood following out-of-competition testing last September. The case will be heard by the Court of Arbitration of Sport in September, where Yang faces a lifetime ban if found guilty.

Meanwhile, British-born Michael Gunning’s championship ended in disappointment as he failed to advance from the preliminaries of the 200m butterfly event. The national record holder placed ninth in Heat 2 with a time of 2:02.89, nowhere near enough to challenge the top 16 qualifying places, which included times of 1:57:14 or better.

The final saw history being made as 19-year-old Hungarian Kristof Milak capture his first world title, winning gold in a world record time of 1:50.73 seconds. Milak lowered the 10-year mark by eight-tenths of a second, which was set in 2009 in Rome by swimming legend Michael Phelps. Milak’s earth-shattering performance made him the first teenager to win the world title in the event since Phelps himself won it as an 18-year-old in 2003.