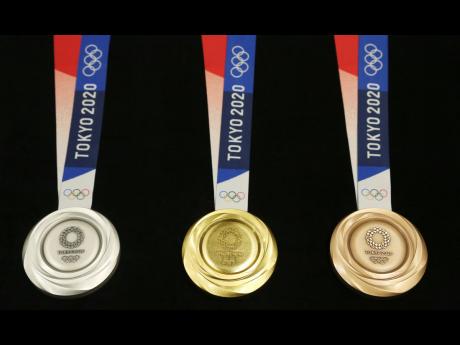 AP
Tokyo 2020 Olympic medals are unveiled during a One Year to Go Olympic ceremony event in Tokyo yesterday.

With exactly one year to go until the Tokyo Olympics open, organisers marked the day by unveiling the gold silver, and bronze medals that will symbolise the 2020 Games.Thousands of politicians, sponsors, and fans jammed a massive exhibition hall in central Tokyo yesterday, piling on speeches, musical interludes, and dancing performances to celebrate the one-year mark.

Japanese Prime Minister Shinzo Abe made a cameo appearance to welcome the guests. And International Olympic Committee President Thomas Bach repeated what he has said often in various places around the world.“I can truly say,” Bach said, “I have never seen an Olympic city as prepared as Tokyo with one year to go before the Olympic Games.”

Despite all the talk and theatrics, the centre stage belonged to the medals by Japanese designer Junichi Kawanishi.Kawanishi wrote that the medals are to “resemble rough stones that have been polished and which now shine with light and brilliance”.The front side carries the Tokyo Olympic emblem, with the Greek goddess of victory on the back.

Bach, a fencing gold medallist in the 1976 Olympics, conducted a mock fencing duel earlier in the da with a junior-high student – another chance to draw attention to the one-year milestone. The games will be held July 24-August 9, 2020.

Tokyo is spending about $20 billion to prepare the city to host the games, though exact Olympic spending is disputed and difficult to track. Five of the eight new venues are already finished, and the centerpiece, the $1.25 billion National Stadium, is to open by the end of the year.

Ticket demand by Japanese residents appears to be a least 10 times above supply – maybe more – with demand also surging abroad. A recent law banning unauthorised ticket resales in Japan is sure to be tested because of glaring loopholes.Organisers are also preparing for Tokyo’s typically hot summer weather, though this summer has been wet and cool. Traffic and subway congestion is also a concern, as is earthquake preparedness.