One down, two to go for Alaphilippe, still in yellow at Tour 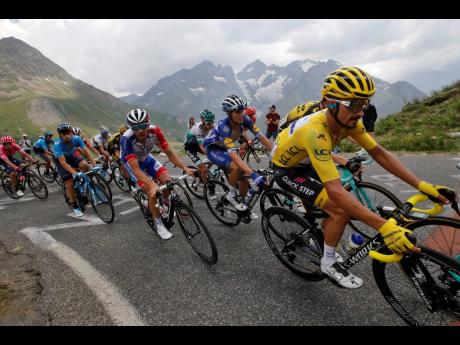 Christophe Ena
France’s Julian Alaphilippe, wearing the overall leader’s yellow jersey, climbs the Galibier pass during the 18th stage of the Tour de France cycling race over 208 kilometres, with the start in Embrun and the finish in Valloire, France, yesterday.

One big Alpine stage complete, just two more to go, and Julian Alaphilippe is still in yellow with France, yet another step closer to having a first Tour winner since 1985.

Continuing to contribute more than anyone to making this the most exciting Tour de France in decades, the French rider recovered from a moment of weakness on the lunar-landscaped Galibier pass and sped down treacherous hairpin bends on the other side to preserve his race lead yesterday.

“It was a day of folly,” Alaphilippe said.

“I unplugged my brain, and I was on the limit on each bend,” he said. “I did a crazy descent, where I took risks. I wanted to save my jersey.”

But it wasn’t a perfect day for Alaphilippe. With a decisive, well-placed attack on the slopes of the Galibier – the last of three climbs to above 2,000 metres on Stage 18 – Colombian rider Egan Bernal got away from Alaphilippe and ate into his lead.

Bernal vaulted from fifth to second in the overall standings. Having started the day two minutes, two seconds behind Alaphilippe, Bernal is now just 90 seconds behind him.

“It’s very good for the morale. But Julian demonstrated once again that he is very strong,” Bernal said. “For now, I’m still behind Julian. Everything is possible. I’m in the mix, but to win the Tour is difficult.”

Bernal’s teammate, defending champion Geraint Thomas, tried to make it a one-two punch by also attacking on the last hairpins leading to the top of that climb, lined by excited crowds.

But with Alaphilippe starting to wobble on the ascent, Thomas couldn’t make the offensive stick. Alaphilippe caught him again on the downhill to the finish. Thomas is still 1:35 behind Alaphilippe, as he was at the start of Stage 18, but slipped back to third overall behind Ineos teammate Bernal.

Colombian rider Nairo Quintana won his first stage, flying away from everyone on the Galibier and putting some colour back into what so far had been an underwhelming Tour for the former two-time runner-up. Quintana vaulted from 12th overall to seventh, now 3:54 behind Alaphilippe.

With Quintana and Spanish riders Mikel Landa and Alejandro Valverde, Movistar now has three riders in the top 10, a possible launching pad for the team to launch more attacks in the last two Alpine stages.

But Alaphilippe is proving tough to dislodge. He has now worn the yellow jersey for 13 stages at this Tour, the most by any French rider at a single edition since Bernard Hinault held it for 17 days in winning the race for a fifth time in 1985.

Two huge obstacles lie between Alaphilippe and Paris in the shape of two more Alpine stages, both with uphill finishes.

Few had expected him to hold his own in the Pyrenees and, now, on the first day in the Alps.

But he’s making believers with each extra step closer to the finish.

“No matter where I finish in Paris, this Tour will have left a mark on French people,” he said. “And I’ll have learned a lot about myself.