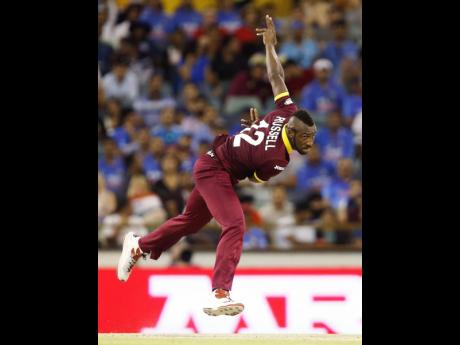 Left-hander Darren Bravo has been sent packing for the one-day series against India starting next month, with injury-plagued all-rounder Andre Russell also overlooked in a 14-man squad announced yesterday by West Indies selectors.

Both players featured in the Windies’ failed ICC World Cup campaign in England where they had little impact in their limited appearances, as the Caribbean side finished ninth, only ahead of last-placed Afghanistan.

From that World Cup squad, speedster Shannon Gabriel and off-spinner Ashley Nurse have also been dropped, along with batsman Sunil Ambris, who was called up as an injury replacement for Russell.

Meanwhile, veteran opener Chris Gayle has been included in the 14-man squad after making an about-turn on his retirement, with the trio of opener John Campbell, all-rounder Roston Chase and seamer Keemo Paul called up for the three-match series which bowls off in Georgetown.

Interim head coach Floyd Reifer said the composition of the squad reflected the start of the rebuilding effort with the next World Cup in mind.

“We have to start planning now for the World Cup in 2023 and we are looking for a solid squad that we can work with over the next four years,” said Reifer, who was appointed back in April.

“We want to build them into a consistent winning team in this format, so that they have a real chance of success in four years time.

“We had a number of young players in the last World Cup squad. We played some decent cricket. We were in match-winning positions, but we just didn’t win the key moments or finish off the games.

“The players have learnt a lot from the World Cup, and we are looking to improve their skills, their mindsets and playing together as a team. The more they can play together, the better it will be for them.”

Bravo is one of the major omissions, especially since it comes less than a year following his return to international cricket from a two-year hiatus, owing to a nasty public squabble with former Cricket West Indies president Dave Cameron.

However, in 16 One-Day Internationals since, he has managed only 244 runs at an average of 22 with a single half-century. He played just three matches in the World Cup and batted only twice, scoring 0 and 19 in those outings.

He limped out of the tournament with a chronic knee injury which dogged him throughout and hampered performances.

Campbell and Chase, meanwhile, have been handed opportunities to press their claim for permanent spots in the side. The left-handed Campbell averages nearly 50 from six ODIs, fuelled largely by a sparkling 179 in his only innings in the Tri-Nations Series in Ireland back in May while Chase averages 21 from 16 ODIs with a single half-century.

Paul, a promising 21-year-old, played the last of his 11 ODIs last December before being sidelined with injury.

Gayle provides the bulk of the experience in the unit with 10, 393 runs from 298 ODIs, along with 25 hundreds but is coming off a low-keyed World Cup where he managed only 242 runs at an average of 30.

He is two months away from his 40th birthday and in the twilight of his career but Reifer endorsed his presence in the Jason Holder-led squad.

The opening ODI is set for August 8 with the remaining matches on August 11 and 14 at Queen’s Park Oval in Port of Spain.