Dwyer on the comeback trail 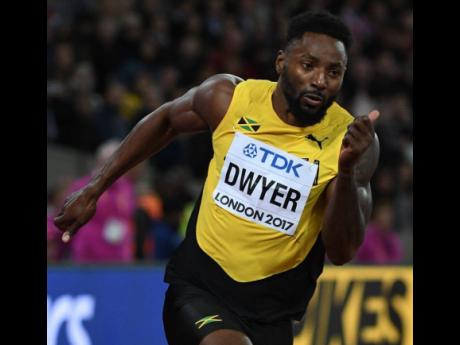 The year 2016 should have been a good one for Rasheed Dwyer. His stocks were rising, and with the Rio Olympics approaching, Dwyer was on the accelerator. Sadly for the Sprintec Track Club stalwart, illness struck. Now 30, the broad-chested sprinter has fought his way back into the reckoning. According to his coach, Sprintec founder Maurice Wilson, Dwyer has more to give.

Last month, the former Camperdown High school star regained the national 200 metres title he first held in 2013 with a hard-fought win over Yohan Blake. Struck by the Zika virus in the run-in to the 2016 Olympics, Dwyer is having his first trouble-free season since then.

“This year is the only year where we have gone and had no major complaints in terms of injuries,” reported Wilson earlier this month.

His charge sped to the 2011 World University Games gold medal and similar honours at the 2013 NACAC Championships and the 2014 Commonwealth Games. He earned silver at the Pan-American Games, where he set a meet record of 19.80 seconds in the semis. The only Jamaicans to go faster are Usain Bolt, Blake and Warren Weir.

He lost the final to Canada’s Andre De Grasse despite a run of 19.80 seconds.

Ranked by respected Amercian publication Track and Field News in its world top 10 for both 2014 and 2015, Dwyer ran a leg of the 4x100m relay for Jamaica at the World Championships and mined gold when the team won the final.

“At that time, it spoke clearly to his ability to perform at that level,” Wilson said. “What happened after that? He got the Zika virus. He was never the same.”

Noting that the virus can stay in the human system for two to three years, Wilson predicted good things for Dwyer.

“He has now become a technician at what he does,” Wilson assessed. “I think that there’s scope for greater improvement. I think that he’s been one of the best-ever 200-metre runners we have produced,” he said.

Extolling Dwyer’s performance portfolio, he said, “Remember, we’re talking about someone who has got a medal at NACAC, Pan Am, CAC, World University Games.

“So he has been around. He has been through the ranks, and once we’re able to keep him healthy, he’s a coach’s dream, then I think that we can only continue to make great improvement,” added Wilson.

Dwyer won the nationals in 20.23 seconds, just ahead of Blake last month in Kingston. In addition, he matched his three-year-old 100-metre personal best of 10.10 seconds to capture third place in the behind Blake and Tyquendo Tracey.