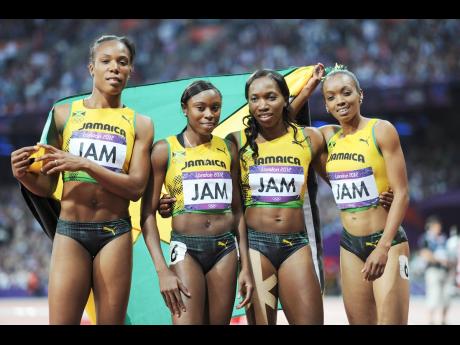 Ricardo Makyn
Jamaica’s women’s 4x400m relay team of (from left) Rosemarie Whyte-Robinson, Shericka Williams, Novlene Williams-Mills and Christine Day at the Olympic Games at in London, England on Saturday, August 11, 2012. The team, which finished third in the event, was originally given a bronze medal but since upgraded to silver after a doping sanctions on the Russian team that finished one position higher.

It is a moment of celebration whenever an athlete is to receive an international medal while representing their country, but several female athletes expressed their disappointment in what they described as lack of representation from Jamaican officials during their big moment.

The six Olympians received the medals for their efforts in the mile relay at the 2008 and 2012 Olympics where they had initial won the bronze but were consequently upgraded due to doping sanctions handed to the Russian teams that had won silver.

After the event, the athletes vented frustration at the seeming lack of recognition from the Jamaica Olympic Association (JOA), citing poor organisation and neglecting to make appropriate arrangements for their attendance at the ceremony.

The JOA, however, has denied those claims and sought to shed light on the situation.

The Olympic body said that upon being informed of the medal ceremony, they entered into discussions with the International Olympic Committee (IOC) about scheduling a date, to host the event that would be convenient for all stakeholders.

The JOA went on to say that on July 1, an agreement was met that the ceremony would be held at the London Diamond League meet on July 20 and 21 and that the information was relayed to the athletes, and that they were informed of possible challenges.

“They were advised to take into consideration the fact that the event being only three weeks away, there may be logistic challenges, particularly in view of firstly, the fact that persons including some Olympians and their allowed guests required visas and, secondly, the imminent games commitments and preparation requirements of the JOA which may very well preclude attendance,” the body said in a statement yesterday.

To date, the JOA said that it received an apology from Williams-Mills regarding inappropriate conduct and misconceived concerns, as well as thank you notes and emails from Lloyd and her nephew, as well as Whyte-Robinson, Wilkins and Day.

The JOA explained that the reason for their absence at the ceremony was due to prior commitments and obligations in respect to the 2019 Pan American Games in Lima, Peru, and has expressed their apologies for being absent.

The Olympic body said it will always seek to commend the athletes on their achievements as they continue to represent the country.