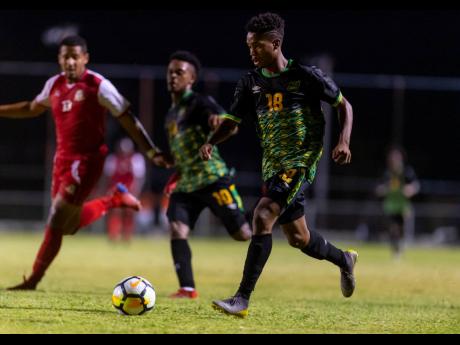 Gladstone Taylor
Jamaica’s Lamar Walker (right) in action ahead of teammate and captain Alex Marshall (centre) while Ezrick Nicholls of St Kitts and Nevis keeps watch during the Caribbean Zone Concacaf Olympic qualifer played at the Anthony Spaulding Sports Complex on Sunday, July 21, 2019. The game ended in a 1-1 draw.

In the schoolboy football season of 2016, Cornwall College’s Jourdaine Fletcher was all the rage.

So impressive was he that season that there were widespread calls for him to be included in the senior Reggae Boyz squad for a practice game against Honduras. I remember saying at the time on radio that picking a youngster to play for the national team purely on the basis of what he does against schoolboys was not the way to go.

At the time, I remember getting some stick in certain quarters for not wanting to “buss the young balla dem”.

Fast forward three and a half years.

A few days ago, I was among the crowd at Arnett Gardens who saw Jamaica get knocked out of the first round of the Olympic qualifiers. We could not beat either Dominica or St Kitts and Nevis at home. Coach Donovon Duckie is getting some serious battering from the public for failing to see the team through. Duckie, of course, cannot escape blame. Football is a result business. He failed to get the results. End of story.

With that said, I found it interesting that many in Arnett Gardens for those two games were quick to point out that “dem Jamaican balla yah nuh good”. Many lamented their inability to master the simple basics of the game. When juxtaposed against the call for schoolboys to be included in the senior team three years ago because of their ‘brilliance’ in schoolboy football, I had to chuckle to myself.

Our fans have come full circle. On the field for those two games against Dominica and St Kitts and Nevis were many of the schoolboy footballers people used to wax lyrical about. At different times over the last few years, people like Tyreek Magee, Alex Marshall, Kaheem Paris and Lamar Walker were all thought to be superstars while they were playing against their peers in high schools.

People talked them up to the point where you could have been forgiven for thinking that they were all Pelé reincarnated! They all played in those two Under-23 games, and none of them looked great. In fact, both Magee and Marshall suffered the ignominy of being taken off in the second game, while Paris didn’t even see the pitch for that one.

None of these players have dominated the local Premier League after leaving school. That tells its own story. Put against the best Under-23 players from two countries ranked well below us, these schoolboy stars were just not able to shine at all.

The argument that we should make our best schoolboy players play for the senior team has now died a natural death. Ironically, Fletcher did not even make this Under-23 squad.

Many have now come around to what I was saying then. Our Manning and daCosta Cup players are not as good as some of us may believe. They will ‘salad and pile’ some little 16-year-olds just learning the rudiments of the game, but that ought not to make us see them as being overly special.

So while we take the belt to Duckie for not guiding the team past this stage of the Olympic qualifiers, let the Under-23s’ failure remind us of what I was telling you all years ago. Stop over-hyping our schoolboy footballers! Generally speaking, they are not as good as we think they are.