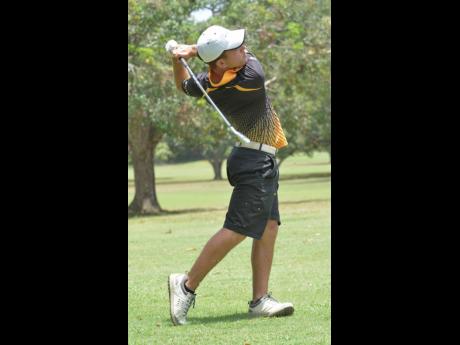 Like it was a year ago, Jamaica had to settle for the second position following the final day at the 32nd Caribbean Amateur Junior Golf Championship at the Albany Golf Course in Nassau, Bahamas.

The Jamaicans entered the final day tied with Puerto Rico on 96 points, but the defending champions did more than enough to see off Jamaica’s charge to win the Hank James Trophy with a total of 155 points.

Interestingly, the Jamaicans got just one more point than they did last year, finishing on 137. Host Bahamas finished in third place with 129 points, with Trinidad and Tobago ending in fourth place with 98 points. Barbados rounded out the top five after amassing 92 points.

On the individual side, Jamaica’s captain, Justin Burrowes, retained the James Moss-Soloman trophy after topping the Boys’ 18 and under category. Burrowes knocked in three birdies in his final round of one-under-par 71, his second one under par round of the championship.

He would finish with a total of 214, beating out Puerto Rico’s Andrés Arangurán by three shots.

“I played some solid golf over the three days. I drove the ball pretty well and put well, and I don’t think there were many flaws in my game, and that helped me to retain my title,” said Burrowes.

Jamaica’s Jack Stein had an improved third round, shooting 77 to finish in fifth position in the category with a total of 234. Compatriot Seebert Walker Jnr was tied for ninth place following his total of 243.

On the female side, Hannah Foster had to settle for the runners up spot as her final-round 83 meant she finished with a total of 237. That is six shots off eventual winner Emily Odwin of Barbados.

Katherine Lee ended in a disappointing ninth place, following her total of 309.

In the Boys’ 15 and under, Rocco Lopez was the best-placed Jamaican, finishing in third place after another round of 77 saw him with a total of 237. Teammate Tristan Brown claimed fifth with a total of 240, while Matthew Grant placed 13th, following his total of 262. Puerto Rico’s Gustavo Badillo took the top spot with 224.

The Girls’ 15 and under saw Jamaica’s Emily Mayne claiming the second spot as her final-round 80 enabled her to reach a total of 224. That is six shots off the eventual winner, Sophie Anand of the Bahamas.

Jamaica’s Eryn Blakely was tied for fifth with a total of 247.

In the Boys’ 11 to 13 category, Aman Dhiman placed fifth with a score of 255, while Trey Williams held down seventh spot following his total of 263. On the girls’ side, Mattea Issa and teammate Winnie Lau placed second and third after amassing totals of 270 and 272, respectively. The title went to Camila Negroni of Puerto Rico with a total of 239.

Jamaica’s coach, Jason Lopez, said he was very proud of the team despite coming up short once again.

“Our boys and girls gave it their all out there. Unfortunately, we didn’t get the main prize, but I am extremely proud of the team’s effort,” said Lopez.