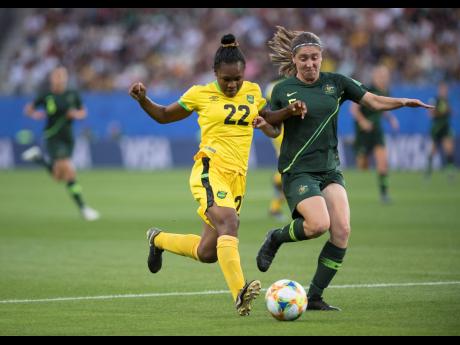 Gladstone Taylor
Mireya Grey (left) of the Reggae Girlz goes on the attack under pressure from Australia’s Karly Roestbakken in the Jamaica vs Australia fixture of the FIFA Women’s World Cup 2019 at Stade des Alpes in Grenoble, France, on Tuesday, June 18, 2019.

Head Coach Hue Menzies believes that Jamaica’s Reggae Girlz will receive special attention from their rivals at the Pan American Games and has identified today’s opening match against Mexico as a grudge match of sorts, given the Central American’s absence from the recent FIFA Women’s World Cup

Menzies believes that Jamaica’s exposure and performance at the Women’s World Cup have made them a bigger brand globally as well as a bigger target. As a result, he believes that Mexico, who missed out on World Cup qualification, will be coming to reclaim their pride and prestige as one of the region’s stalwarts when they face the Reggae Girlz today at the Estadio Universidad San Marcos in Lima, Peru, at 10:00 a.m.

“We got a little X on our backs. It’s crazy to think Jamaica’s going to South America and has an X on their backs. Those (other) teams (in group) didn’t get an opportunity to be at the World Cup. We were fortunate we got to be there, but Mexico was not there, and normally, they represent Concacaf on a regular basis. So we know that this first game (Sunday) they will be getting after us, but we expect it and it should be a good, competitive game,” Menzies said.

The Jamaicans will also face Colombia and Paraguay in the preliminary round.

“Hopefully, we can go out and put on our best performance, based on the players that we have,” added Menzies.

The coach said he is expecting his players to step up and show their quality in Lima and made reference to the World Cup, where a number of players lifted their game throughout the tournament.

He was also quick to note that the focus of their participation is to continue developing and exposing players to international competition as they build towards their long-term objectives.

“We are looking forward to it, and that’s why we play these games. No matter if we advance or not, we know we are going to get three quality games and we have a long-term plan. We have some successful players that we plan to have here that can go both ways (play in junior and senior team), so we will have those players, and we will be looking forward to building them and the entire programme,” Menzies noted.

“But we are looking for those surprises. Sydney Schneider at the World Cup, we knew she was good but we did not know she was that good,” said Menzies.

Menzies will look to the experience of players like Sashana Campbell and Torianna Patterson along with the young exciting talents of Jody Brown, Mireya Grey, Olufolasade Adamolekun, Shayla Smart, and Chantelle Swaby.