What a catch! - Heaven confident Coley will lead Scorpions to the top 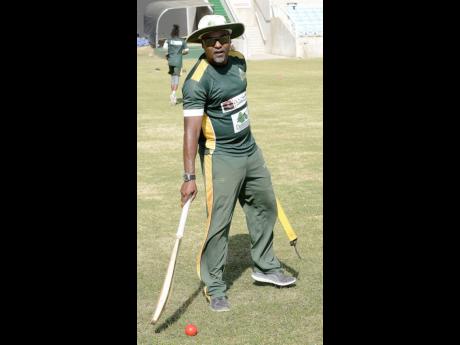 President of the Jamaica Cricket Association (JCA) Wilford ‘Billy’ Heaven says that his administration is confident that newly appointed head coach of the Jamaica Scorpions Andre Coley is the right man to revive the fortunes of the national team.

Heaven confirmed to The Sunday Gleaner that the vastly experienced Coley would take charge of the Scorpions in September when he completes his tenure with the West Indies ‘A’ team.

He said the association is looking forward to working with Coley, who led the Windward Islands Volcanoes to the Regional Super50 title 2018.

“I think it is a good move because he is experienced, he is qualified, he has been exposed, and he comes with a lot of qualities, and he is also a people person, which is important for us,” said Heaven.

“He can motivate others, and that is also important, and so I think he will be able to have the team perform as a team, and I think it is a good choice,” he said.

The JCA boss underlined that due diligence was followed during the selection process, with Coley being selected from a batch of Level Three coaches, who were interviewed for the post.

“Qualified coaches, all Level Three, have applied, and there was an interview process involving technical people, and he came out on top,” said Heaven. “I believe it is a good choice, and we are very happy about this.”

The 44-year-old Coley, who is a former national wicket-keeper, recently completed a two-year stint with the Volcanoes, which ended last month. He will replace Robert Haynes, who left the post to take up the role of chairman of the West Indies selection panel in April.

The Scorpions, who have not won the Regional four-day competition since the 2012 season, finished fifth in the six-team standings last season.

However, Heaven outlined that they have a good crop of the young players coming through the national set-up, and with the instalment of Coley as head coach, he is very optimistic that they will do great things in the future.

“I think we are building a good group of players, but, of course, any time you are in the development mood, things take a longer time. As you know, our emphasis right now is to build our cricket from the foundation level, and we have been doing that very well, and we are seeing some good results,” said Heaven.

“The team that we have has talent, but it is just to get those talents together for them to come as a team and to give of their best,” he said.

“We need people around them who can motivate them and people who can get them to believe in themselves and to have the confidence to know that they can perform well so that they can be in the top level,” Heaven noted.

Coley previously coached Jamaica’s Under-15 and Under-19 teams and later led the Windies squad to third at the 2010 Under-19 World Cup.

He was a key figure in the execution of the Wi High Performance Centre in Barbados and also served on the coaching panel of the West Indies Women’s team and senior men’s squad, where he worked with the wicket-keepers and fielders, particularly.