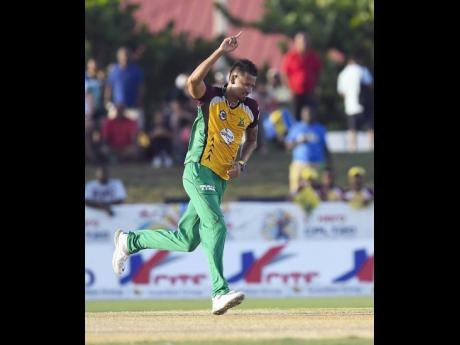 The Trinidadian duo of Dwayne Bravo and Rayad Emrit both produced solid performances as their Winnipeg Hawks rebounded from defeat to trounce the Vancouver Knights by eight wickets here yesterday.

The Hawks, who fell to the Montreal Tigers on Friday, produced a sensational batting performance to easily overhaul the Knights’ challenging total of 208 for five from their 20 overs.

Led by a scintillating unbeaten knock of 77 from 38 balls from J.P. Duminy and 77 from Chris Lynn, the Hawks romped to 210 for three off just 15 overs and two deliveries.

Bravo also made a worthy contribution of 36 not out from 17 balls to take his side over the line.

Earlier, Chris Gayle had top-scored for the Knights with 45 runs from 27 balls at the top of the order as they posted what appeared to be a formidable total.

Gayle hammered two sixes and seven boundaries, and he was well supported by fellow Jamaican Chadwick Walton, who made 30, as well as Rassie van der Dussen (39) and Shoab Malik, who finished unbeaten on 28.

Medium-pacer Emrit was the best Hawks’ bowler, snaring three wickets for 40 runs from his four overs.

Needing over 10 runs an over for victory, the Hawks found themselves in early trouble, losing the quick wickets of Shaiman Anwar for four and Umar Akmal for nine to slump to 15 for two.

However, Lynn and Duminy launched a savage attack on the Knights’ bowlers during a 143-run stand in only nine overs.

And when Lynn eventually lost his wicket with a further 51 runs required, Bravo’s breezy knock ensured that there would be no late drama.