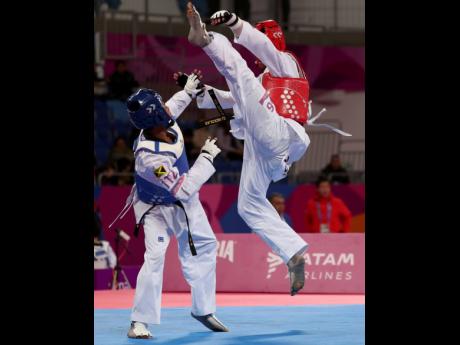 Jamaica’s senior women’s football team started their Pan American campaign on a losing note, falling 2-0 to Mexico in their opening game of Group A at Estadio Universidad San Marcos in Lima, Peru.

Goals from striker Kiana Palacios and captain Charlyn Corral made the difference as Jamaica struggled to contain the Mexican attack. Palacios capitalised on Mexico’s various opportunities from set pieces as she scored from close range from a corner in the 39th minute. Corral doubled Mexico’s lead in the 58th minute when Palacios combined with Stephany Mayor as Jamaica goalkeeper Sydney Schneider attempted to her close down. However, Mayor’s low pass found Corral, whose one-time effort rolled past the Jamaican defence and into the net as Schneider raced to get back.

The Reggae Girlz weren’t without their chances; Shayla Smart forced a save out of Mexican goalkeeper Cecilia Santiago a minute after the break, and Chyanne Dennis had her shot, which missed the target at the hour mark. However, Jamaica’s two key opportunities came in the final five minutes. Defender Jayda Pelaia-Hylton’s effort hit the post, and from the resulting corner, the ball fell at the feet of midfielder Lauren Silver, who had an open look on goal but could only place her effort over the bar.

Mexico finished with 15 shots, seven of those on target, while Jamaica only attempted seven shots, with three on target. The Girlz lost the possession battle 59 to 41 per cent.

In the day’s other events, the Jamaica rugby sevens team finished sixth overall as they were beaten 50-12 by Chile in their fifth place game. The Crocs had defeated Guyana 33-19 in the fifth- to eight-place game earlier. Jamaica’s men lost 3-0 to the United States in Pool C of the men’s squash team tournament, while taekwondo competitor Brandon Sealy was defeated by American Carl Nickolas Jr in their Under-68kg round-of-eight encounter.

However, a glimmer of hope for the country came in gymnastics as Danusia Francis qualified for the all-around final, which takes place today at 1 p.m., and the beam final on Wednesday.