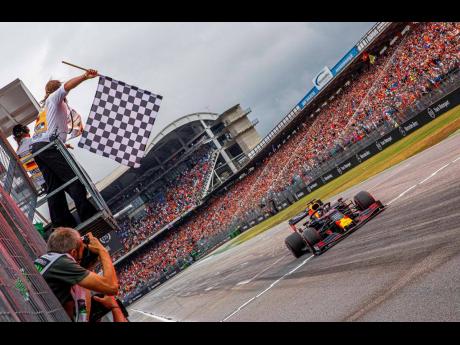 AP
Red Bull driver Max Verstappen of the Netherlands crosses the finish line to win the German Formula One Grand Prix at the Hockenheimring racetrack in Hockenheim, Germany, yesterday.

Verstappen mastered yesterday’s treacherous conditions on a rain-soaked track to seal a second win in three races and the seventh of a career that appears destined to take the ice-cool Dutchman to the top of Formula One (F1) before too long.

Verstappen raised his fist triumphantly as he took the chequered flag at the Hockenheimring, finishing ahead of Ferrari’s Sebastian Vettel and Toro Rosso’s Daniil Kvyat. A jubilant Red Bull team principal Christian Horner described his driving as a “masterclass”.

While Verstappen’s long-term future looks as dazzling as the orange jerseys of the devoted Dutch masses following their national hero, he is not yet a championship contender.

Although that’s more to do with his car than with him.

Victory moved Verstappen to within 22 points of Mercedes driver Valtteri Bottas overall, but Lewis Hamilton is 61 points ahead of Verstappen after 11 of 21 races. A rare blip from Mercedes, with Bottas and Hamilton not scoring a point, happens as rarely as the 41°c heat that turned Hockenheim into a furnace on Friday.

Hamilton finished 11th after starting from pole position, while Bottas crashed near the end, failing to overtake Lance Stroll.

“They’re still miles ahead in the championship. It’s still quite a lot, isn’t it? More than two victories,” Verstappen said of Mercedes. “[But] we want to close that gap and fight for victory at every single race.”

Verstappen has four podiums in 11 races and has been outside the top four positions only once – proof of his consistency but also that Red Bull lacks outright speed to challenge Mercedes every race.

Still, this was an imperious performance from Verstappen, who simply thrives in the rain. He credits his father, Jos Verstappen – a modest F1 driver – with helping him develop the skills required.

“A lot of practice from when I was young, in the wet, working many hours with my dad – who was also pretty decent in the wet,” Verstappen said. “He provided tips. It’s also about making decisions in the wet, not just ­driving but ­noticing what is going on around you.”