Oral Tracey | Looking beyond the disaster 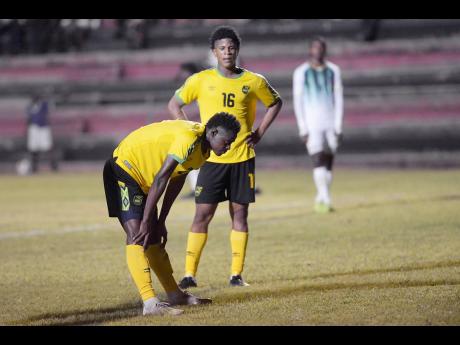 Shorn Hector
Jamaica’s disappointed duo of Nicque Daley and Chavany Willis (front) look on after the team missed on multiple attempts to break the deadlock against Dominica in their Olympic qualifying match at the Anthony Spaulding Sports Complex on Wednesday, July 17. 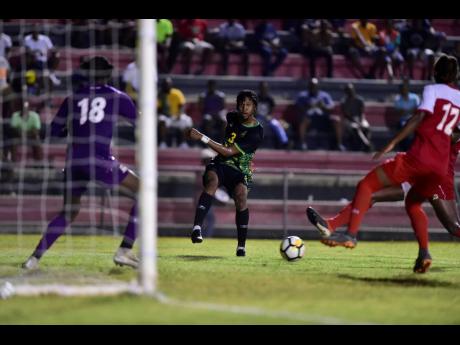 Football is played on the field and not on paper. That is perhaps the most relevant and profound of clichés that aptly captures the essence of the demise of the Jamaica under-23 footballers in their failed quest for a place in the Olympic Games in Tokyo in 2020.

Olympic qualification in football remains the most difficult of tasks of any international tournament from a Jamaican perspective, as only two spots are allotted to the entire Concacaf region, comprising 25 eligible nations. Local fans were quite cognizant of that fact, and were more cautiously optimistic than expectant about the young Reggae Boyz making it all the way. What the football public was not prepared for was a sprawling and embarrassing exit at the first hurdle, especially playing at home against regional minnows Dominica, and St Kitts and Nevis.

With the actual débâcle still being analysed and scrutinised, what is already abundantly clear is that there is enough blame to go around for the coaching staff and the players involved. In a context where the preparation of this particular team was well funded by the Jamaica Olympic Association, in addition to the good fortune of having a gifted group of players to work with, with the pursuant befuddling tactical approach in the two games played, it is extremely difficult to fathom how head coach Donovan Duckie can escape the bulk of the blame for the team’s timid and unimpressive returns, which ultimately led to their elimination.

This setback aside, this crop of players, in a Jamaican context, remains supremely talented with lots of genuine potential. It is hard to look beyond this general core for the next set of players that will constitute the senior team going forward. The likes of Alex Marshall, Tyreek Magee, Nicque Daley, Lamar Walker, Jamoy Topey, Jeadine White, Kaheem Paris added to the likes of Peter-Lee Vassell, Jourdaine Fletcher, even Shamar Nicholson, and Leon Bailey are eligible for this under-23 core. No one can deny the bundles of potential here, potential that did not disappear with a few below-par performances and two bad results.

The Jamaica Football Federation needs to keep faith and not allow this core to drift off into obscurity. President Michael Ricketts and the federation leadership, after securing a now-imminent four years in office, should immediately snap out of campaign and nepotism modes, and focus on the wider vision needed to drive the football forward.

There will continue to be constraints, but the federation must pay keen attention to what our immediate rivals in Concacaf are doing, with a mission not to allow the gap to widen between Jamaica and the likes of the Mexico, the United States, Costa Rica and the other teams across the region. The new structure of the World Cup qualification set to take effect for the 2022 qualification cycle, requires us to keep pace with the big boys as an imperative to an automatic spot in the hexagonal final round. The transitioning of at least some of this talented under-23 group will be crucial to that cause.

The players must also play their role in the process by developing more professionalism and personal pride in their own craft. This can only be achieved by going the extra mile in terms of work on their physical and psychological fitness and technical preparedness, work which should ultimately pay dividends in their own professional careers, and ultimately trickle down to the national team.

The early exit from Olympic qualifying was a big blow that left us all sprawled out on the canvas, but what is important is no longer the blow that put us on our face. What will define our destiny is how we conjure up the will, heart, and desire to pick ourselves up and go again.