Blake: I’m going to bring it for Doha 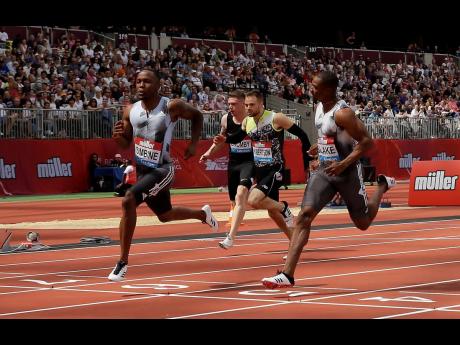 Tim Ireland
Akani Simbine (left) of South Africa crosses the finish line ahead of Yohan Blake (right) of Jamaica to win a men’s 100m heat at the IAAF Diamond League meet at London Stadium in London, England, on Saturday, July 20.

Though they finished second and third in the 100m at the London Diamond League meet, Zharnel Hughes and Yohan Blake both took comfort from their performances on the day. The Racers Track Club teammates both identified stumbles that spoilt their runs, but nevertheless, they left London with hope for the IAAF World Championships which start on September 28 in Doha, Qatar.

The London race was won by South Africa’s Commonwealth Champion Akani Simbine in 9.93 seconds, with Hughes and Blake clocking 9.95 and 9.97, respectively. Hughes, who won the European Championships title for Great Britain last year, cruised to 9.96 seconds in the heats, but had a slow start in the final.

“I am quite happy minus the stumble, but I think I ran a great race and held my composure, and it was good to be in front of a London crowd,” the Jamaica-trained Hughes said afterwards.

Fifth in the 2015 World Championships 200m final, Hughes is compiling a notable record in the 100m. In addition to winning the 2014 ISSA/GraceKennedy Boys and Girls’ Athletics Championships Class One 100m with a still-standing record of 10.12 seconds, he took 100m titles for Anguilla at the Carifta Games and Pan American Junior Championships in 2013, and at the 2014 CAC Junior Games.

Blake just missed the yearly best of 9.96 seconds he set in his National Championships victory last month, but was happy nevertheless.

“It’s alright,” he said. “Thank God I came out injury-free. I wanted to make a race of it, but I could tell I just stumbled, which kind of knocked me off, but I’m feeling great,” he commented after that race.

“In the season, it’s a bit early with me running times like this right now,” he said after his 38th trip under the old 10-second barrier, “but, come Doha,” the 2011 World Champion promised, “I’m going to bring it.”

The South African finished behind Blake, fifth to fourth, at both the 2016 Olympic Games and the 2017 World Championships before beating the 29-year-old Jamaican, first to third, last year at the Commonwealth Games. Like his rivals, he has his eyes on success later in the season.

“It’s mostly about building the confidence and making sure I get through the races and winning them,” he explained. “So, by the time I get to World Champs and I’m facing the rest of the world, I’ll be ready and the confidence will be there.”

Should he sprint to the podium in Doha, Simbine will be the first South African, male or female, to win a World Championships medal in the 100m.