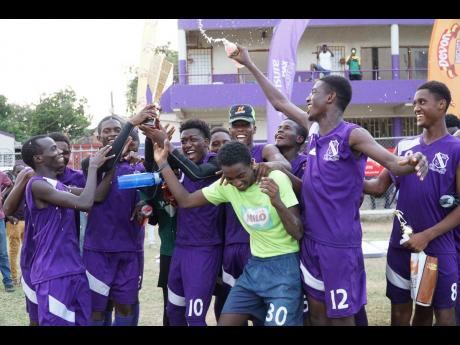 Reigning ISSA/Digicel Manning Cup champions Kingston College made an impressive showing in their preseason preparations as they walked away champions of the 2019 Yardie Sports Challenge Cup on Sunday at their school’s field.

They began the day with a positive result after turning back opponents Calabar with a 1-0 victory to conclude the first round of matches in the tournament.

The road to the final for the champions was made secure when their semi-final ­fixture against Hydel High was unable to be played, giving the hosts a bye to the final.

A source inside the Hydel camp said that their absence was due to injuries and exhaustion, which left them unable to field a team. The organisers of the competition said that this was because of the number of matches the team has played over the course of its preseason so far.

In the second semi-final fixture, St Catherine High booked a clash with Kingston College when they defeated Calabar High in a close 1-0 encounter. The solitary strike came off the head of striker Rajneil Brown, who watched his header bounce into the net after a goalkeeping mistake from Calabar.

In the final fixture, Kingston College ran out as comfortable victors with an efficient 3-0 drubbing of St Catherine.

It took only seven minutes for the ­champions to get on the scoresheet, when Chris Pearson’s header found the back of the net from a corner. He would return for another goal just seven ­minutes later when a rousing shot struck the arm of a St Catherine defender in the box and Pearson calmly converted from the spot.

The game was sealed in the 21st minute when a moment of magic from Jahmari Morrison added his team’s third of the evening. Collecting the ball at the edge of the area, Morrison slipped from the attention of his marker with a drop of the shoulder before a deft touch floated the ball over the head of the back-pedalling St Catherine custodian.

Ludlow Bernard, coach of Kingston College, felt that this competition was a good indication of his team’s readiness.

“I feel the competition played its ­purpose,” he said. “We got the ­opportunity to see how the players are under a ­tournament environment with spectators. It gave some good indication as to the levels of some of the players and the levels of our combinations that we’re trying out.”

His opposite, Anthony Patrick, coach of St Catherine High, felt that the ­competition allowed his team to see the areas that needed work going forward.

“Defensively, we looked like we could get things in place despite giving up three early goals. Our offence, we will need to fix and fix quickly,” Patrick explained. “Our goalscoring is a factor. We only scored one goal to come into the final, so we need to work on that.”