U-23 Boyz continue search for win 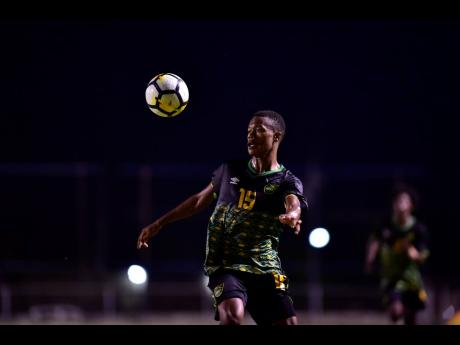 Gladstone Taylor
Jamaica Under-23 footballer Deshane Beckford in action against St Kitts and Nevis in their Olympic qualifying match at the Anthony Spaulding Sports Complex on Sunday, July 21.

Jamaica started their 2019 Pan American Games football tournament on a losing note, going down 3-1 to Honduras in their opening Group B match at the Estadio Universidad San Marcos yesterday.

Deshane Beckford fired the Jamaicans into the lead in the 46th minute, but a brace from Darixon Vuelto (72nd and 81st minutes) and a goal from Douglas Martínez (78th minute) helped the Central Americans rally from a goal down to claim all three points.

Jamaica started the game well, although both teams had good chances in the first half. Beckford was the first to threaten the goal, but his effort was tipped over by Honduras goalkeeper Alex Guity.

Honduras replied soon after with a shot from Rembrandt Flores that went just wide. Minutes later, Flores had a similar effort that Jeadine White had to parry away. But Honduras ended the half the stronger of the teams and just missed taking the lead in added time when Jose Pinto headed wide from Elvin Oliva’s cross.

Beckford, who had Jamaica’s opening opportunity, closed the half with a rasping volley that forced Güity into a save.

Jamaica took the lead just one minute into the secondhalf when Beckford beat Güity with a low shot. But Honduras pushed the Jamaican back in defence and came close through José Reyes, Kervin Arriaga, and Denil Maldonado. They eventually got the equaliser when Reyes’ low shot was redirected inside the post by a sliding Vuelto in the 72nd minute.

The goal gave the Central Americans renewed confidence, and they took the lead six minutes later when Martínez followed up his own rebound to score from point-blank range after White saved his header on the line.

The Hondurans then put the game to bed when Vuelto curled a beauty from the top of the area past an outstretched White in goal. All Jamaica’s efforts to get back into the game proved futile as the Hondurans held firm in defence.

The result is the third straight without a win for under-fire head coach Donovan Duckie, who failed to get his team into the second round of Olympic qualifiers after 1-1 draws against Dominica and St Kitts and Nevis on home soil last week.

The Jamaicans will face Uruguay in their second Pan Am game on Thursday at 5:30 p.m.