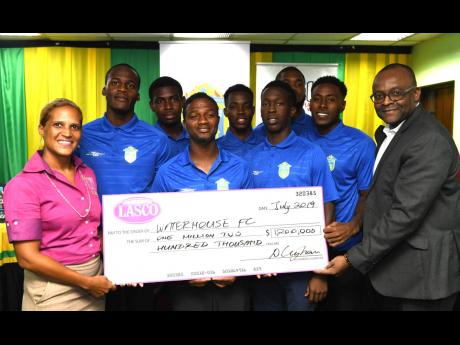 Ricardo Makyn
Danielle Cunningham (left), beverage marketing manager, LASCO Distributors, presents a cheque for $1.2 million to Donovan White (right), president of the Waterhouse Football Club, at yesterday’s media briefing ahead of the Scotiabank Concacaf League match between Waterhouse and HS Herediano of Costa Rica. Sharing in the moment are Waterhouse head coach Marcel Gayle (fourth left) and several players of the club. The briefing was held at the offices of the Jamaica Football Federation.

Waterhouse coach Marcel Gayle described playing in the Concacaf League Round-of-16 as an opportunity and an inspiration for his players, the club, and the community.

The Red Stripe Premier League finalists take on HS Herediano from Costa Rica at the National Stadium on August 22. Details of the match were announced during a press conference at the Jamaica Football Federation (JFF) yesterday.

“It’s an opportunity for the youngsters of Waterhouse to go out and showcase their talent. This is the biggest stage you can ask for in terms of local football and people are always asking for international football, but now we have it in our backyard, so we take it very seriously. Preparation has gone well and we are asking for the support of the wider community,” Gayle said.

“But as kids growing up, we always want to play at this level. This is a platform to showcase our youngsters in the squad, who will relish this opportunity, and not just for themselves, but for the community. We are not going to take this as just another game. We are grateful and proud to be a part of it and moving forward in the competition. It will be great for us as more countries will be watching the further we go and people will know it’s no joke. But this is a platform for any player who wants to excel and get an opportunity,” he added.

Gayle believes it will take their best to get over the seasoned HS Herediano team, but he is convinced they can progress in the competition.

“We are still learning. The first round would have set us up, young André Fletcher would have scored two goals, and we have players in the squad we want to give an opportunity. But if they do it and pull off the impossible, it will be great, because the team we are playing is no pushover. Central American teams are usually very competitive and very good, and we know our opponents and what we are up against ... but we are up for the task and we can only get better and learn,” Gayle noted.

JFF President Michael Ricketts was pleased to see sponsors coming on board to aid Waterhouse in this venture and has pledged whatever support they can give to the Drewsland-based club.

“I must say congratulations to Waterhouse and Portmore, who have advanced to the Concacaf Championship, and the sponsors of those teams, who will be ambassadors for us.

“Over the years, we have underestimated the impact of sport, and what has happened here today with Waterhouse is the impact of football and what it can do. So we look forward to this game, as they will compete with a team from Costa Rica, which will be a good strong team, but I am sure Waterhouse will be ready for the challenge and the JFF will give as much support as it can to Waterhouse and Portmore, as we are excited about what will transpire later down the road.

“When youngsters see these clubs on the international stage, it must motivate some to do well and provide a catalyst for some youngsters. So it’s (tournament) an aspiration that will provide a platform for them,” Ricketts said.

Waterhouse will play the return game of the two-way tie on August 29 in San José, Costa Rica.