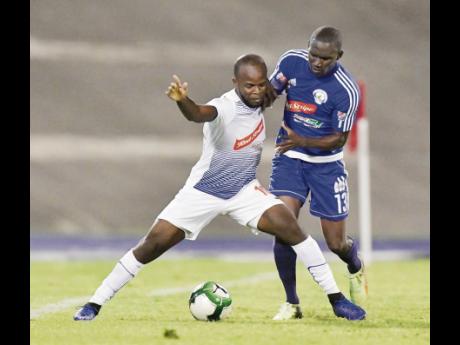 Gladstone Taylor
Javon East (left), representing Portmore United, keeps Xavian Virgo of Mount Pleasant away from the ball in the Red Stripe Premier League semi-final at the The National Stadium on Monday, April 15.

Having netted his first two goals for Santos de Guaplies in the Costa Rican top flight, on-loan Portmore United striker Javon East has now set his sights on scoring 15 goals for the club this season.

East, who was joint top scorer in the Red Stripe Premier League (RSPL) last season with 12 goals, told The Gleaner from his base in Costa Rica, that he was extremely happy with his performance in the league so far and that he was hungry for more goals.

He scored in the 33rd and 65th minutes to help his team to a 4-0 win over Deportivo Saprissa in the Costa Rican Primera División to secure their first win in three games.

“Things have been going well so far because I have been adapting to the atmosphere over here, and the fans have welcomed me with open arms,” said East.

“From the preseason, I just adapted to their style of play because I scored seven goals during that time, and so things are looking good,” he added.

“I always take it game by game because I played good against the big team on Sunday, where I scored two goals, and my aim now is to score 15-plus goals this season and so I am now looking forward for the next game on Sunday,” said the former Calabar High School Manning Cup star.

The 24-year-old East, who made his senior debut for the Reggae Boyz against South Korea in Turkey in 2018, spoke to the experience of playing in a new league and the challenges of adjusting to the style of play.

“The league is great because everyone is playing hard and every game is played like it is a final,” East said. “It is way different from playing at home because the level never drops and so I have to play hard from the beginning to the end.”

East, who signed a one-year loan deal with Santos de Guaplies in June, had played a vital role in helping Portmore to secure back-to-back RSPL titles in the last two seasons. He understands fully well that once he continues to work hard in training, he will continue to do well in the competition.

“I am going to continue working hard in training and listening to the coaches and do my best whenever I step out on the field,” added East, who is yet to score for the Reggae Boyz in his eight appearances so far.