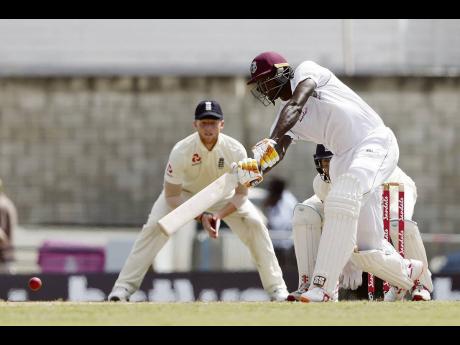 AP
Windies captain Jason Holder plays a shot against England during Day Three of their first Test match at the Kensington Oval in Bridgetown, Barbados, earlier this year.

West Indies captain Jason Holder has thrown his support behind the newly launched ICC Test Championship, stressing that the longest format of the game remained the ultimate test of character and expressing a desire to see West Indies build on their success against England earlier this year.

The ICC, cricket’s world governing body, recently launched the championship, which will see West Indies, along with Australia, Bangladesh, England, India, New Zealand, Pakistan, South Africa, and Sri Lanka, do battle in 71 matches across 27 series over a two-year span.

The two top teams will clash in a final to determine the world Test champions.

“Going through five intense days of cricket and then the last session, getting the ultimate results – that’s the beauty of the game,” Holder said.

“When you’re on the winning end of a Test match, after fighting so hard, that actually makes you feel like you have done something significant … .

“I cherish those moments and every Test win because they stand out significantly. Being put under pressure for five days – the mental struggle, the mental grind – and then to be able to win is what it’s all about.

“We recall the win at Leeds against England back in 2017. When we played so hard and gave it everything, to come away with that kind of victory was truly remarkable and quite memorable.”

West Indies have struggled in Tests for the best part of the last two decades and currently languish in eighth spot in the ICC rankings, only above Bangladesh and Zimbabwe.

However, they beat world number ones England 2-1 in a three-match series back in February to claim their first series win over a higher-ranked side in seven years and reclaim the coveted Wisden Trophy for the first time in a decade.

The Caribbean side’s first assignment in the Test Championship is a two-match series against India starting this month.

“Hopefully, our group will continue to build and face the challenges ahead and win a few more Test matches,” Holder said, looking forward to the rubber.

“It should be a really good battle when we start against India in a few weeks. Both teams are at a stage where we have some really good players, and we have to build on what we started earlier this year.”

He continued: “Beating England at home was tremendous for us. We played some excellent cricket in all three departments, and it was great for this young team to recapture the Wisden Trophy after so long and also capture the imagination of the fans again.

“It showed us that once we play well, we can beat the best teams. On home turf, we are looking to make sure we can beat India at home as well.”

The Test Championship will see each team play three home and three away series, with each series counting for 120 points.

Designed to breathe new life into the Test format, especially in the wake of the success of the Twenty20 game, Holder backed the initiative to take flight.

“It brings a different dynamic to Test cricket. It’s the format that the true cricket fan really loves and adores,” said the leading all-rounder.

“Having something more to play for now, with points and an overall winner at the end of the two years and to decide who is the best Test team in the world, is great.”

He added: “Having numbers and names at the back of the shirts also adds a bit of flavour to the game as well. This should add a bit more colour to Test cricket; having the numbers and names gives a clear indication of who is who.”

Holder has chosen No. 8.