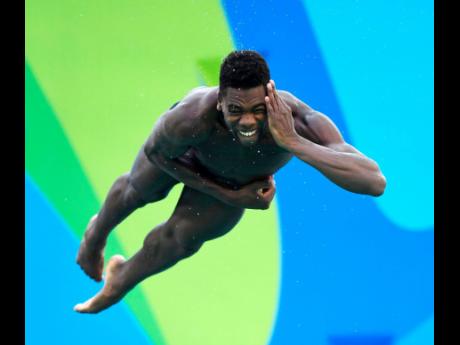 Jamaica’s medal tally at the Pan American Games increased to two on Thursday evening as diver Yona Knight-Wisdom took home silver in the 1m springboard event at the aquatic centre in Lima, Peru.

The 24-year-old Knight-Wisdom improved on his top qualifying score of 378.20 points to finish the final in second place with an excellent score of 429.90. Mexico’s Juan Hernández took gold, accumulating 435.60 points, while USA’s Andrew Capobianco won bronze with 411.25 points.

Wisdom was buzzing after his podium finish, Jamaica’s first in the sport at the Pan American Games.

“It’s an awesome feeling!” he said in an ­interview with The Gleaner yesterday.

“I’m proud to have won a medal for Jamaica at this Pan Am [games], the first in diving for Jamaica ever. It’s another positive step on the journey I’ve been on in 2019 so far.”

That journey has included his exploits at the FINA World Championships recently held in Gwangju, South Korea. He qualified for his first world championship final after three attempts in the 1m springboard event, finishing 10th overall, and in the 3m springboard, where his score was not enough to advance past the preliminary stage.

Knight-Wisdom credits the experience gained during the competition with his final score even surprising him.

“I was the third best Pan American diver at the World Championships, so I knew there was every possibility that I could get on the podium here [in Peru]. I didn’t know I was capable of a list and a score like that! That was a big surprise,” he said.

His final tally was boosted with an outstanding dive in Round Five, which scored 81.60, the highest of the round. Wisdom tweeted after the final, stating that the inward two and a half somersault pike effort was his worst dive when he attempted it at the 3m springboard. He took a calculated risk to include the routine for this season.

“I did it at the end of last year in 1m for the first time, and it went beyond my expectations, so I decided to include it in my list for this season. I decided to put it in Round Five because it (has a) high degree of difficulty, and I could use the adrenaline at that stage to help it score highly. (It) worked to perfection!”

President of the Amateur Swimming Association of Jamaica (ASAJ) Martin Lyn was pleased with his achievement, ­reiterating Wisdom’s pedigree in the sport and his ­accomplishments for Jamaica.

“I’ve always said that Yona has done a lot of good for Jamaica in terms of putting us on the map in areas that we wouldn’t normally be ­represented in any other sport, so definitely, diving is on the up and up as far as Yona is ­concerned, and we are very proud of him, and he has done the ASAJ and Jamaica proud,” said Lyn.

Knight-Wisdom will look to use the ­momentum gained to propel him further when he competes in the 3m springboard ­preliminaries at 12:30 p.m. tomorrow.