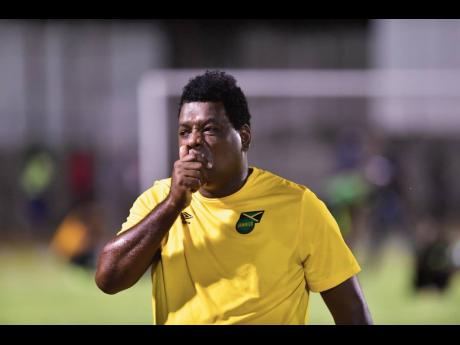 Jamaica Football Federation (JFF) President Michael Ricketts said under-fire national Under-23 head coach Donovan Duckie admitted to cracking under pressure when confronted about his comments regarding the JFF’s role in the team’s failed Olympic qualifier and Pan Am Games campaigns.

Duckie last week pointed fingers at the JFF administration, arguing that the organisation should take some blame for the team’s horrific performances due to their failure to provide a dedicated physical trainer for the Young Reggae Boyz, resulting in what he described as the most unfit team he has ever coached.

The team, regarded by many as one of the best collection of Under-23 players assembled to represent the country, failed to beat traditional regional minnows Dominica and St Kitts and Nevis in their Olympic qualifiers at home, prematurely ending their Tokyo 2020 Olympic dream and are also yet to win at the Pan Am Games in Lima, Peru.

Ricketts, who is also in Peru, said he recently met with Duckie, who admitted that the pressure from being knocked out at the first round of Olympic qualifying, which was followed by an even more shocking display at the Pan Am Games, was overwhelming and caused him to break down.

“He admitted to me that he cracked under pressure. Those were the exact words he used,” Ricketts told The Sunday Gleaner. “He said he was so pressured that he really felt overwhelmed by the situation. He is very disappointed, like all of us are, but we have to soldier on.”

The JFF boss added that his administration is taking its time to assess the situation and would not make a decision on Duckie’s future until due diligence has been completed.

“We don’t want to make any hasty decisions, and we don’t want to embarrass anybody. They are in the process of preparing their reports, both coaches and the manager. I have asked that a detailed report be made by both the two coaches and manager, and there will be an in-depth review of what transpired and led to such dismal performances, and we will take it from there. But after the reports come in, the coaches and the technical committee of the JFF will meet, and we will make the decision after,” Ricketts said.

He also said that he could not determine if this would be the last national stint for the controversial coach, if he is sacked.

“I am not the one who makes these decisions, but when the report is submitted, the technical team, technical committee, and chairman will meet with the leadership of the JFF and decide the way forward,” Ricketts said.