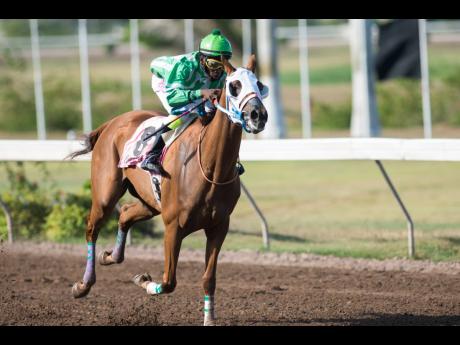 Leading rider, apprentice Christopher Mamdeen returned to form with a vengeance yesterday, booting home a three-timer on the 10-race card, including a chance ride aboard DONTAE in the Kenneth Mattis Memorial at 10 furlongs.

Signalling his intentions from the opening event, Mamdeen produced a busy ride in the straight to make all aboard 1-5 favourite, RAW LIQUID, repelling FATHER KEN’s late rail run.

Aboard 5-2 chance DONTAE in the fourth, Mamdeen went in chase of UNCLE VINNIE from the half-mile marker, caught him coming off the home turn, and powered through to win by a length and a half.

Mamdeen returned to close his three-timer in the seventh, making all with speedy SOUL CURE, who won unchallenged at five and a half furlongs at odds of 8-5.

The leading rider’s three-timer moved him 17 winners clear of Lewis and Walker, who are joint second, locked on 49.

Lewis scored with 3-1 shot MIRABILIS in the third, outfinishing PHINEAS, but Walker replied with a late two-timer, ROYAL AVIATOR in the eighth and BLIND FAITH in the 10th.