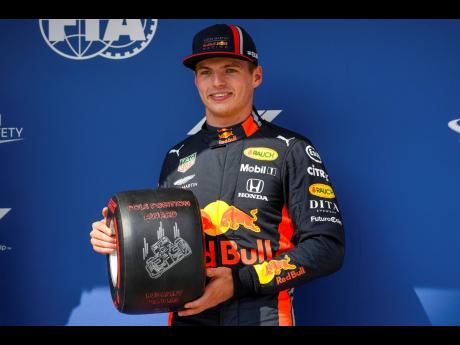 Max Verstappen produced a near-perfect lap at the Hungarian Grand Prix to take the first pole position of his Formula One career yesterday.

“Big thanks to the team,” Verstappen said. “The car was flying.”

It was another boost for the 21-year-old Verstappen, who has won two of the past three races to creep into outside contention for the title race.

“This feels good. This feels really good,” said Verstappen, who became the 100th F1 driver to take a pole. “This one was missing. ... It was only a matter of time.”

Given that the Hungaroring track is one of the toughest to overtake on, he is in a good position to clinch an eighth career F1 win today.

Verstappen is the youngest driver to win an F1 race – he was 18 when he won the Spanish GP in 2016 – and is the fourth youngest to take pole. He sits behind Fernando Alonso, Charles Leclerc, and record-holder Sebastian Vettel, who were all also 21.

Valtteri Bottas qualified in second place ahead of his Mercedes teammate Lewis Hamilton, the five-time F1 champion, who was chasing a record-extending 88th career pole and record-equalling seventh at the Hungaroring circuit to match F1 great Michael Schumacher.

“Max did a great job,” Hamilton said. “It kind of got away from me.”

Leclerc, who took his first career pole in Bahrain in March, placed fourth ahead of his Ferrari teammate Vettel. The Ferraris were quickest in the first sector of qualifying, but both tailed off.

Leclerc recovered well after spinning the car in the first part of qualifying, known as Q1, sliding backward into the barriers and drifting back on to the track as a Williams car came flying past.

Verstappen’s Red Bull teammate Pierre Gasly, qualified sixth ahead of McLaren’s Lando Norris, who has impressed in his debut season.