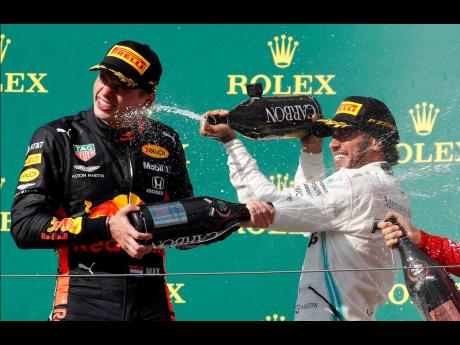 Lewis Hamilton overtook Max Verstappen near the end of the Hungarian Grand Prix to earn his 81st Formula One race victory and extend his championship lead.

The Mercedes driver is now only 10 wins behind seven-time F1 champion Michael Schumacher’s record of 91.

Mercedes made a strategic gamble with about 20 laps to go to bring Hamilton in for a second tire change, while Red Bull decided to keep Verstappen out on track in the hope he could defend on a difficult track for overtaking.

It proved a Mercedes masterstroke.

The much quicker tires helped Hamilton swallow up Verstappen’s 20-second lead and he finally got past the Red Bull on lap 67 of 70, having failed to overtake him several times earlier in the race.

Sebastian Vettel finished behind Verstappen in third place for Ferrari, ahead of teammate Charles Leclerc and McLaren’s Carlos Sainz Jr.

Verstappen held his lead from pole position under pressure from Hamilton and his Mercedes team-mate Valtteri Bottas heading into Turn 1. But it was Hamilton who ended on top to clinch a record-extending seventh career win in Hungary, while Verstappen earned a consolation point for the fastest lap.

At the start, Hamilton quickly got ahead of Bottas, as they brushed each other and the Finnish driver was then overtaken by both Ferraris on the 4.4-kilometre Hungaroring circuit.

Lapping two seconds slower than Vettel by Lap 6, Bottas came in for a front-wing change, following contact with Leclerc’s Ferrari.

Bottas also had a near miss when overtaking Lance Stroll, just about avoiding contact with the Racing Point driver.

By Lap 24, Verstappen complained of losing tire grip. He came in for a tire change on the next lap, coming out ahead of both Ferraris.

Mercedes seemed unsure of when to bring Hamilton in for his tire change, changing their minds on Laps 26 and 27. Eventually, the British driver came in on Lap 32, but a poor pit stop – lasting 4 seconds, compared to 2.6 for Verstappen’s – cost Hamilton momentum.

Still, on fresh tires Hamilton soon caught up to Verstappen, forcing the Dutchman to defend his position from the Mercedes driver’s attacks.

On Lap 40, Hamilton almost got past Vertappen – first on the inside, then on the outside – but Verstappen kept his cool as Hamilton veered slightly off track, attacking on the outside.

Hamilton seemed to be feeling the pressure.

“What more can I do?” he asked his team on radio.

“Keep the pressure on,” was the blunt reply.

“I can’t keep the pressure on,” Hamilton snapped back.

In what proved a race-winning move, Hamilton came in for another pit stop on Lap 49 – putting him 20 seconds behind Verstappen but giving him much faster tires than Verstappen for the closing stages.

“We should have pitted as well,” Verstappen shouted, as if aware of the denouement.

Verstappen’s lead was wilting in the afternoon sun, and with five laps left it was just only three seconds.

After taking the checkered flag, Hamilton was quick to recognise his team was right all along.

“Sorry I doubted the strategy,” he said. “Oh man, that feels good. That feels so good.”

So will looking at the championship standings.

He now leads Bottas by 62 points and Verstappen by 69 with nine races left when the season resumes on September 1 at the Belgian GP.

Vettel, a four-time F1 champion, is 96 points behind Hamilton in fourth place and has not won any of the past 20 races.