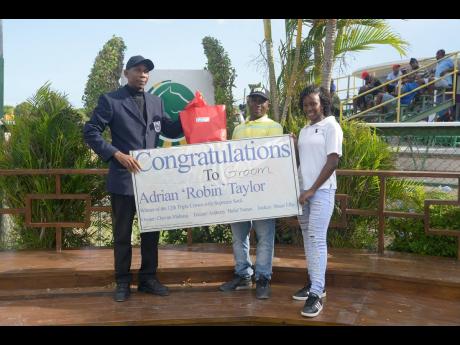 Reigning Triple Crown-winning groom Adrian Taylor said his achievements this year in the racing industry have propelled his career to new heights as a lot more people are now looking at him as a role model in the sport.

In fact, Taylor is now well on his way to claiming the champion groom title, with stakes earnings of more than $14.9 million ahead of his second-place challenger Trevor Bernard, with $8.75 million.

Taylor told The Gleaner that despite his success this year, he remains humble and grateful for the love and support that he has received from his peers.

“It is a good look to know say when I came into the business in 1988, it was my dream to win a Triple Crown, and I achieved this with SUPREME SOUL, and so I am very grateful and humble,” said Taylor.

“A lot of people show respect more and other grooms are looking up at me now, and so it is really a great feeling for me to have a Triple Crown winner,” he added.

Taylor, who is also the groom of KALAHARI, has recorded 12 victories so far this season and has also had stints in Canada and United States in the past.

He underlines that his experience from working overseas has helped him to hone his craft and improve his skills very smartly over the years.

“It is a lot of work that I put in to achieve this, and so I thank God for my co-workers who helped me along the way,” said Taylor. “We work as a team, and once you work as a team, then you have a good side. That is what the trainer Anthony Nunes has, a good side, and he is going to deliver the trainer’s championships this year.”

“For me right now, it is just more hard work and dedication and never dropping my guard in this game,” Taylor stated. “Horse thing is a technical thing, and so you just have to stay focused one hundred per cent and keep on doing your best at all times.”