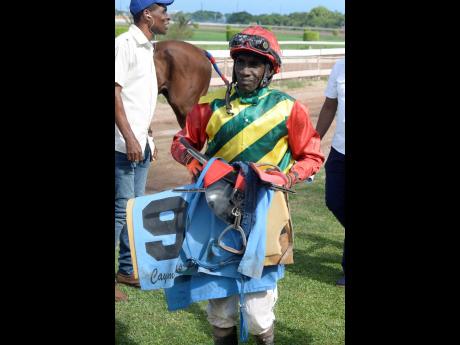 SPARKLE DIAMOND, the most talked-about horse in training at Caymanas Park, starts his race against time this afternoon to meet the conditions for what could be the fifth and last running of the US$115,000 Diamond Mile on November 9.

Having made a total transformation within three months of finishing next-to-last on his March 30 debut, the imported three-year-old chestnut colt has been sending shivers down the spines of rival trainers since moving from Paul Charlton to Ralph Porter’s barn for his last two races.

Facing six rivals in the opening event at five furlongs straight is expected to be a third-straight walk in the park for SPARKLE DIAMOND, after clocking 1:05.3 and 58.3 in back-to-back races at five and a half and five furlongs round, respectively, since finishing next-to-last behind SENTIENT on March 30.

However, it is what happens after this afternoon, that will determine SPARKLE DIAMOND’s race to face the likes of SHE’S A MANEATER and STRANGER DANGER, and possibly defending champion WILL IN CHARGE, in the Diamond Mile.

An expected victory would push SPARKLE DIAMOND past $1.5million in earnings from four races, way past the likes of other Diamond Mile aspirants such as BIGDADDYKOOL. However, it’s not earnings from just about any race that will get him into the Diamond Mile.

New conditions for the $13million event gives automatic first-preference entry to winners of the Jamaica Derby, Superstakes, Caribbean Sprint Championship, Invitational Mile, Gold Cup, and the Diamond Mile from the previous year provided he finishes first to third in at least one grade-one event.

Four positions are “reserved for horses domiciled in Barbados and Trinidad and Tobago since January 1, 2019, as well as two positions for horses being imported directly to Jamaica for the event from any other recongnised racing jurisdictions less than two months before the November 9 Diamond Mile”, the conditions further state.

After today’s baby hurdle, SPARKLE DIAMOND would have graduated to overnight allowance, where his earnings towards Diamond Mile qualification would have just started accumulating. Hence, fly high, fly low, SPARKLE DIAMOND’s target must be the August 31 Gold Cup, one of five guaranteed ‘win and you’re in’ races, the other open to him being the Invitational Mile on Superstakes Day, October 5.

In both races, Grade I events, SPARKLE DIAMOND will come face-to-face with STRANGER DANGER and, possibly, SHE’S A MANEATER in the Gold Cup. Defeat in either will mount roadblocks in his Diamond Mile path unless trainer Porter manages to amass enough stakes earnings from overnight and open allowance races.