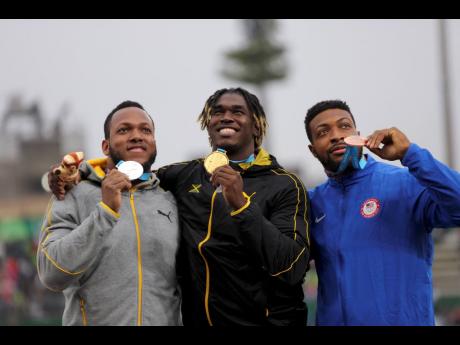 Fedrick Dacres is probably losing count of the number of men’s discus records he has broken throughout his career. After surpassing his own national record with a throw of 70.78m in the Rabat leg of the IAAF Diamond League, he stepped into the ring here ­yesterday to claim the Pan American Games record. This time, he registered a distance of 67.68m to take gold ahead of his training partner Traves Smikle, who took the silver with a distance of 65.02m, ahead of the USA’s Reginald Jagers III, with 64.48m.

Despite a shorter distance than his Diamond League record, Dacres was happy with the performance, citing challenges he had to ­overcome for glory.

“This was a good one for me because I was feeling a bit of pain in the competition, but I’m glad I could’ve walked away with the gold medal and the record. So I’m thankful,” Dacres told The Gleaner.

However, he believes that his ­technique could have been better.

“It wasn’t as smooth as I would’ve wanted,” he explained. “My first two throws were easy and relaxed, but when I tried to really go for it, I tightened up a bit.”

Dacres admitted to The Gleaner that he is not fond of travelling to cold environments such as the ­climate here now. He said the cold weather, which averaged 14°c, had some impact on the result.

Dacres said that looking towards the IAAF World Championships next month, he will now seek to get stronger and better technically.

Smikle was all smiles after ­claiming a medal at his Pan Am Games debut.

“To come here and finish in the top three, having a silver medal, I’m happy,” Smikle said. “In life, ­nothing is easy. You have to decide for ­yourself what you want, and I decided that I’m not going to give up. I’m going to work hard and revive my career, so to speak.”

Tissanna Hickling secured a bronze for Jamaica in the ­women’s long jump, with a mark of 6.59m. She finished behind the British Virgin Islands’ Chantel Malone (6.68m) in first and USA’s Keturah Orji (6.66m). Jamaica’s Chanice Porter jumped 6.44m for seventh.

Jamaica’s athletes were mostly successful in advancing to finals yesterday.

The 100m duo of Natasha Morrison and reigning Olympic champion Elaine Thompson had no issues. Thompson won her heat in 11.36 seconds, ahead of Brazil’s Vitoria, 11.40 seconds, and Trinidad and Tobago’s (T&T) Kelly-Ann Baptiste, 11.49 ­seconds, in second and third, respectively. Baptiste also advanced as the ­fastest loser.

Morrison qualified in ­second place with a time of 11.59 ­seconds behind T&T’s Michelle-Lee Ahye, who won in 11.37 seconds.

On the men’s side, Rasheed Dwyer secured a berth in today’s final with a time of 10.32 seconds in his heat. However, he was beaten by Brazil’s Paulo Camilo de Oliveira, who won the semi-­final in 10.29 seconds.

Dwyer’s teammate, Oshane Bailey, was not as successful as his run of 10.43 seconds could only place him fifth. His heat was won by Antigua and Barbuda’s Cejhae Greene in 10.31 seconds, with Cravon Gillespie of the USA second in 10.32 seconds.

Jamaica’s involvement today starts at 3:00 p.m. with the ­women’s 100m hurdles semi-­finals. The country’s medal tally at the Games now stands at five, consisting of one gold, two silver, and two bronze.