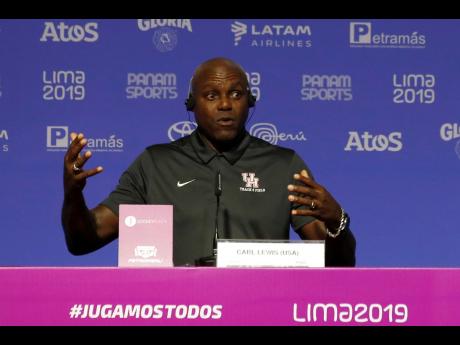 Carl Lewis has reiterated his stance on doping in track and field, this time saying that it went largely neglected because of a lack of courage by those with the power to address it.

Lewis’ comments, which he made while speaking at an official Pan American Games press conference here on Monday, are not the first he has made on the issue, although he said in 2003 that he failed three tests for stimulants in 1988 and that Olympic executives looked the other way.

“It took a long time for our sport to have the courage to actually attack the drug issue,” Lewis said. “Following my career, you know I’ve always been outspoken on that issue. So we had no courage early, then we enabled it, then the world finally said ‘This is not acceptable’. I think everyone’s had the courage to try to fight the issue of drugs in our sport now. I really think that we’re doing a lot better with the biological passport. That has been the most impactful thing that has been happening. I think it’s good for kids. I say kids because I really think we’re trying to appeal to parents who want their kids to be in the sport.”

The focus has shifted more to doping recently because of scepticism around world records, some of which have existed for decades. With that, Lewis was, however, adamant in his rejection of a recent proposal by the IAAF to address the questionable times and distances.

“Some people say, ‘Let’s wipe out all the records before (2005),’” he said. “I’ll tell you something. You’d better not take Mike Powell’s record away because he was clean, and I saw it. Now, we have an event, the long jump, they’re (subsequent competitors) not even close, and you’re gonna say, ‘We’ll take a record away from a great athlete, a clean athlete, that’s one of the greatest performances in track and field history.’

“He broke one of the most important sporting events of the 20th century’s record, and then (you) let someone get a foot less and get a world record in. Absolutely not! Where’s the courage? I think what we should do is exactly what we talked about. Let’s encourage people to be the best that they can be. Let’s teach them that records are not what our sport is about. It’s about competition. All world records, break but (people) remember the performance.”

Although Lewis has an issue with the keen interest in athletes’ times and records, he, too, apportioned scepticism towards Usain Bolt, the world’s fastest man’s performances, saying that any right-thinking individual should be questioning the times he ran.

“The reality is that if I were running now, and had the performances I had in my past, I would expect them to say something. I wouldn’t even be offended at the question. So when people ask me about Bolt, I say he could be the greatest athlete of all time. But for someone to run 10.03 one year and 9.69 the next, if you don’t question that in a sport that has the reputation it has right now, you’re a fool. Period,” Lewis told Sports Illustrated magazine in 2008.

Those comments have led to a long-standing rivalry between Lewis and Bolt, the latter saying that he has lost all respect for the former.